The 19th annual pro/teen classic 2016 was another awesome success. Thanks again to Andy Cuccia (cooch), all the boaters that volunteered and all the sponsors that kicked in, it would not have happened if not for them. The pro/teen classic is a tournament dedicated to Conroy Oakley and is for teenagers from 13 to 19. The pro’s (boaters) donate their time to take a teenager out in a pro style tournament. The pro is only allowed to contribute 3 fish to the 5 fish limit but the teen can and has caught all 5 weighed in in every tournament. There is no money to be won. The teen’s entry is $35 which includes

The top 3 get a rod and reel and plaques are handed out to every teen that participated and one for big fish of the tournament. This year there were 60 teams that went out of Russo’s Marina to fish the huge California delta.  I showed up early like I normally do about 4am. Put the boat in the water and went down to get paired up with my teen for the day. As I walked up I could see a few teens standing around waiting to be paired up. Standing there with all their gear waiting in anticipation almost looking nervous. I’m sure the butterflies were churning in there stomach. Mine still do to this day after 25 years of fishing tournaments. I check in and Cooch hands me the rules and my boat number and yells out for a teen named Nicholas Lynch. Now every year at the pro/teen tournament I get excited to be able to teach someone some things i know about fishing and there have been times where the teen actually teaches me something lol. Iv even had a teen that had his own boat at age 14, his mom and dad would drop him into the water and come back and get him when he was done. We fished his water all day and caught a ton of fish. So after Cooch yells nicks name I turn and see him walk up with an RBBass jersey on. I’m thinking I knew I heard that name before, and that’s where, Rbbassfishing.net. We greet each other and head to my boat tide to the dock. We talk our strategy. I ask if he has water to fish and he said yes later in the morning so I start telling him where we should go and he said let’s do it. We are boat 43 but we’re second boat out. Cooch give the signal of fireworks that we are about to blast off and we start idling out to the mouth of the slough. We fly to potato and I start throwing a Picasso Buzz Saw double bladed buzz bait and nick starts throwing a Yamamoto senko around some sparse tulles with current running into them in about 6′ of water and almost immediately he starts hooking up. I keep getting blow ups on Picasso Buzz Saw buzz bait but there not eating it. After every boil I reel in, grab my Yamamoto senko and pitch it to where the boil was but they don’t eat it. After Nick sticks 3 fish with the senko I put the Picasso down and pick up a black and red 6″ Yamamoto senko and fill our limit within about 10 minutes. We had our limit before a lot of other boats even started fishing. We stick with the senkos and upgrade slowly, just by a little with each fish caught throughout the morning. The bite slowed down so we made a run to disappointment slough and give that spot about 20 minutes with no success. Nick says lets hit his water so we head that way. We pull up to the spot and Nick picks up a frog and I pick up a punch bait and start punching some penny wart. We work the area for about 10 minutes and I stick a small fish that won’t help. Nick says just give it a few more minutes, there should be another one in there. I keep punching and nick picks up the Picasso Buzz Saw and fires a long cast and starts reeling back. He only reeled maybe 5 or 6 turns and there was a huge swirl about 5′ behind the bait, still reeling another 3 or 4 turns and a fish crushes the bait. He gets the fish to the boat and I net it and it’s a giant. We weigh it just to see how much it weighed and I put in the live well, culling a 1 1/2 pound fish. We fish the entire area noticing that big fish came from some Hydrilla in about a foot of water. Hoping for more giants but to no eval. We head into weigh in wondering if we had the winning weight. The weigh in is always fun. Cooch makes it fun and gets the crowd involved. Waiting our turn with our fish in weigh bags sitting in the waiting water tanks we tell Cooch our boat number and hand off the bags to the weigh master. Cooch grabs nick and asked him how the day was and how many fish he caught in our 5 fish limit. As he’s asking nick questions I pull out the giant to show it off and the crowd went nuts and so did cooch. Putting it on the scale it went 8.67. Big enough for the big fish of the tournament. We put the rest of the fish on the scale that totaled 18.97, good enough for 3rd place. One thing that Cooch does is make sure every single teen gets a plaque regardless if the caught fish or not. After a great raffle it was time to head home with a lifetime of memories and new friends. Tell next year!! 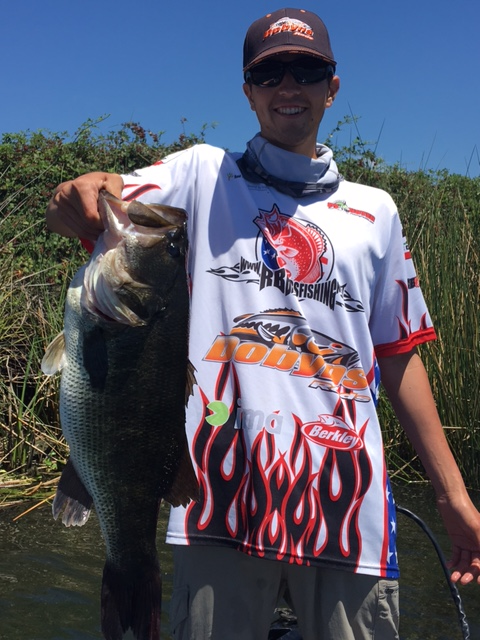 I want to thanks my sponsors