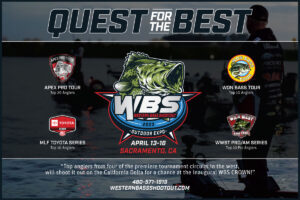 The inaugural WESTERN BASS SHOOTOUT (WBS) has been finalized and is scheduled for April 14-16, 2023, on the Famed California/Sacramento River Delta. 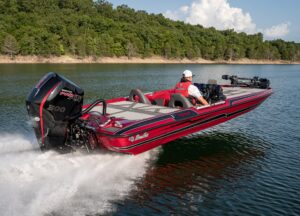 “We are pleased to see this mission come together. Offering western anglers a true championship has been the goal, gathering all the major higher entry and higher participation organizations. We welcome those high-profile fishing companies and enthusiasts to embrace this. All together, we can continue the growth of fishing on the west coast.” said Rick Pierce, President of Bass Cat Boats.

“It is only fitting that our first Western Bass Shootout is anchored in Sacramento. We plan to produce great fan attendance and look forward to bringing a family friendly environment to the region. WBS is designed to be the Super Bowl of Professional Bass Fishing in our entire region. It is not just the great competition; it is a true celebration of the competitors, the fans, and the sport as a whole.” said Wild West Bass Trail and APEX Pro Tour CEO Jeremy DeHart.

“Sacramento has every element necessary for an incredible WBS event,” DeHart said. “It is a great sports town, and bass fishing is prevalent in northern California. There will be a lot of local interest in the event, and people visiting Sacramento for the first time will likely return because the city has so much to offer. The event will be televised on the Pursuit Channel and other various Networks, capable of reaching over 47 million households.”

“WON BASS is very proud of our top 10 Pro anglers of the year and is excited to see how they stand up against the other Pros that have also qualified through other platforms. It is awesome to see this type of format come to fruition again. We wish all the anglers and sponsors luck in the coming months,” said Billy Egan of WON BASS.

Daily takeoffs will occur from Discovery Park, located at the river’s edge of Downtown Sacramento.

In mid-April, the California/Sacramento Delta will show the world why it is a world-class fishery. Daily weights exceeding 20 pounds will be commonplace, and some anglers will have opportunities to top the 30-pound mark daily.

The field will include the highest performing 50 anglers who qualified through the 2022 season angler of the year points race. They will all be vying for a $100,000 first-place prize and a total purse of over $200,000.00, including a top-of-the-line Bass Cat boat and Mercury outboard prize package.