You are here: Home / Bass Fishing News / The path to the Classic begins on New Melones 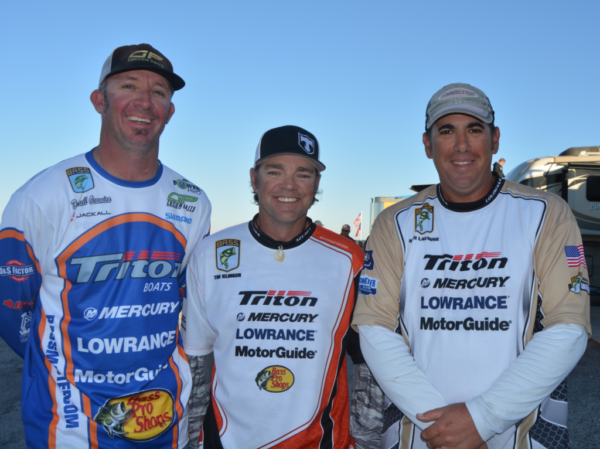 The path to the Classic begins on New Melones

Darrell Ocamica of Idaho, Tim Klinger of Nevada and Ryan Lavigne of Louisiana all started by competing in B.A.S.S. Nation events in their respective state, and now they’re heading to the 2017 GEICO Bassmaster Classic later this month. Anglers in California have the opportunity to climb the same ladder beginning March 18.

SACRAMENTO, Calif. — The path to competing in the Bassmaster Classic begins in California on New Melones Reservoir, March 18-19.

Any angler in California — boater or nonboater — has a chance at competing against the best bass anglers in the world at the 2019 Bassmaster Classic. The road to qualify begins at any of the four California B.A.S.S. Nation tournaments scheduled for 2017, moves on to the Western Regional next spring and culminates in the 2018 B.A.S.S. Nation Championship, in which three of the nation’s best anglers earn a berth in the 2019 Classic.

“No angler from the California B.A.S.S. Nation has ever made it all the way to the Classic before,” said Mark “Chief” Torrez, president of the California B.A.S.S. Nation. “Our state has the best anglers in the country, and there’s no reason one of our members can’t end our streak this year and get one of our guys onto the biggest stage in bass fishing.”

The first tournament of the season is on New Melones Reservoir in Angels Camp, March 18-19. The top boater and top nonboater at New Melones automatically advance to the 2018 State Team, becoming the first to qualify. The rest of the 20-person State Team will qualify either by winning one of the other three tournaments this year (Oroville, Delta or Nacimiento) or by finishing in the top of the points bracket (best three out of four tournaments).

The 2017 State Team, which qualified last year, will put their skills to the test beginning in April at Lake Shasta. The 2017 Academy Sports + Outdoors B.A.S.S. Nation Western Regional presented by Magellan will be held in our home state, April 19-21. The Western Regional is held at a different Western lake every year.

The best boater and best nonboater from California’s 2017 State Team will qualify for the 2017 Academy Sports + Outdoors B.A.S.S. Nation Championship presented by Magellan this fall at a location to be determined. The Top 3 anglers at the championship advance to the 2018 Classic.

In just a few weeks, you can watch three of last year’s top Nation anglers compete in the 2017 Classic, including two from the West. From March 24 to 26, on Lake Conroe in Houston, Texas, Darrell Ocamica of Idaho, Tim Klinger of Nevada and Ryan Lavigne of Louisiana will represent their states on the world stage.

To be on track to make the 2019 Bassmaster Classic, competitors must either win a California B.A.S.S. Nation event or finish in the top of the points by the end of the season. Points are determined on a 100-point scale at each tournament, with the winner receiving 100 points, second-place receiving 99, etc. The top points winners, based on their three best tournaments, will qualify for the 2018 State Team.

The full schedule is as follows:

To register to compete at New Melones, download the entry form here: https://calbn.com/new-melones-reservoir and submit it by March 8. You must be a member of a California B.A.S.S. Nation club to be eligible to compete.

If you have questions about tournaments or about joining a club, contact Mark Torrez at (805) 233-0883 or mark@calbn.com.