I Started out prefishing Thursday the 12th just south of Lakeport at my normal spots. I had a Z man elite chatterbait in sexy shad tide to 15# Vicious pro fluorocarbon and a revo stx on a dobyns champion 736 cb glass rod. Rod number 2 was a sexy shad KVD 1.5 on a dobyns champion 735 cb glass with 12# Vicious pro fluorocarbon spooled onto a revo stx and rod number 3 was a dobyns champion 764c with a revo spooled with 15# Vicious pro fluorocarbon and a 1/2oz strike king sexy shad spinner bait. The water temp had dropped almost 10 degrees in a week so i expected the fish to be chewin , but that was not the case. Burning through 6-8 spots in a couple hours with only one little fish on the chatterbait. I pulled one more dobyns 805 flip/punch rod out of the locker thats had 65# Vicious no fade braid, a 1oz R2Sea trash bomb and a sprayed grass reaction innovations sweet beaver and headed into Rodman slough and started flipping and punching. 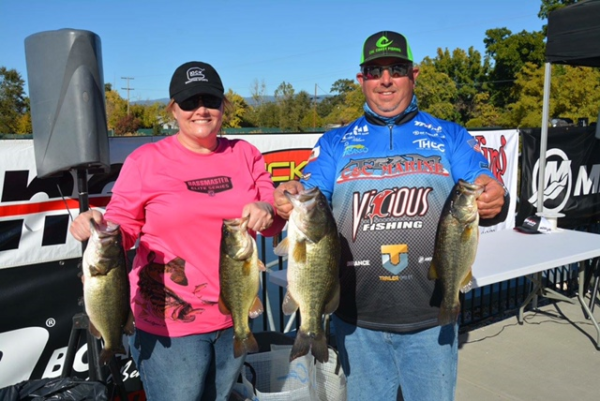 After an hour with no bites i noticed the water level had gone down about 8-10″ so i decided to abandon that area and head south. On the way down the redbud arm i stopped at a secret rock pile that everyone knows about and got bit on the first cast with a nice 3# fish. I left that spot and tried a few other rock piles, catching a couple more chunky fish and calling it a day. Friday the 13th i decided to find another pattern down the redbud arm. With no grass around the only other structure is docks. Knowing how and what the FLW was won on i started working docks. The last month or so the fish have wanted the bait very close to the pillings, even touching them as the bait sank down. With my new Minn Kota Ultrex and a dobyns 735 with 15# Vicious pro fluorocarbon and a wacky rigged 5″ senko. 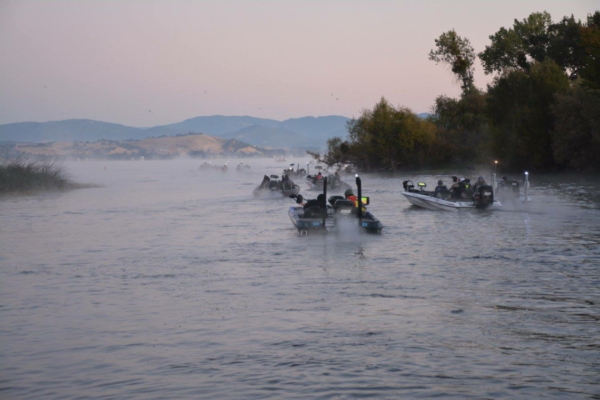 I would pull up to a dock, hit spot-lock on the Minn Kota and started fishing every single pilling at multiple angles. After about 15-20 key docks with no bites, i decided to abandon that technique and go find more rocks and rocks piles for the tournament. Marking them as i drove around, i would stop and check certain areas to see and sure enough, they were on rocks. Knowing where i wanted to fish i headed in for the day. I look foreword to the Triton owners tournament every year. Its a chance to talk to other triton owners about boat set up or prop selection. The pre tournament meeting is great, Kent Brown MC’s it every year and i have even had the chance to sit down and talk with with Earl Bentz, the founder of Triton boats, about elk hunting and fishing but he really loves to elk hunt. Tournament morning is always exiting. The sites, the sounds and the smells, good ole 2 stroke oil in the morning always reminds me of when i first started fishing tournaments. The salute to the flag and then blast off !! Fishing this tournament with my wife is different then normal. Its more relaxing and she keeps me in check ! She started off throw her favorite bait, the 1/2 Strike King spinner bait and i start off with the Z Man chatter bait. She got our first small fish about 20 minutes in and then 10 minutes later she gets another for about 3#s. The key was to slow down. I slowed down and started getting bit. By 9am we had a nice limit staying the same area hitting rocks. I fire out a cast almost hitting the bank and crank the reel twice and the rod loads up. Its a nice 5#er. Knowing we had a decent limit i decide to save that water for Sunday and go pre fishing finding other areas. We fish about 20 other rock pile without a bite and its time for weigh in. 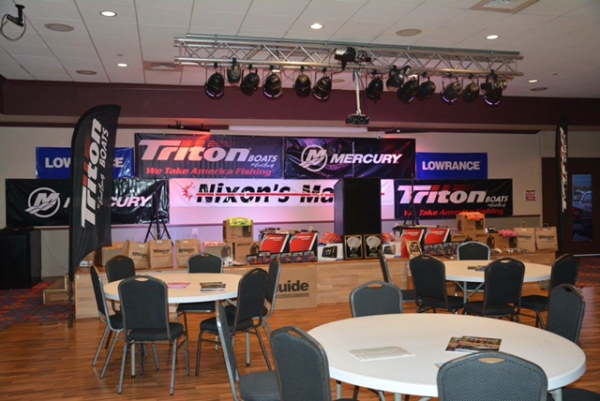 After day one weigh in we are in second about 1 1/2 pounds out of first. The Triton owners banquet is always fun. Its a free steak dinner for the anglers. Its always fun making new friends. Going into day 2, i have the chatter bait rod and my wife’s spinner bait rod on the deck and we head to our spot. 4th boat out we get there and theres a boat already there. As we start fishing more and more boats show up, a lot more then Saturday. We fish the stretch a few times with only 2 little fish in the live well. We start fishing the stretch again and i notice a huge family of otters swimming with us. My heart drops because in my experience the fish scatter when otters show up or so i thought. We decide to go across to rattle snake for awhile and start idling across. As we do i see my buddy flying to where we just left. By the time i get on plane he already had a fish hooked up. Watching him as we go across he sticks 5 more fish on that same spot. 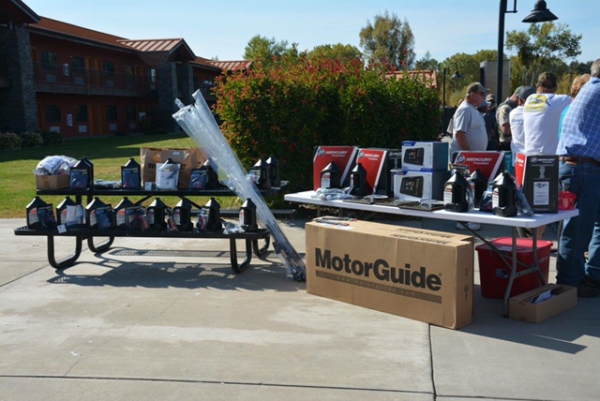 After fishing rattle snake with no luck we go back to where we started in the morning and only get one more little fish. With only 4 fish i start to scramble and end up on a different rock pile about mid lake. I put the nose of the boat in the wind and hit spot lock so we can really work the area. With 15 minutes left to leave for weigh in i hook up with a nice 3 pounder and then with 10 minutes left i ended up culling up a little more. Heading into weigh in Im going over the mistakes i made throughout the day and wish i could do it over, it was a good learning experience that ill keep in the back of my mind. We ended up with a little over 8#s and leave with a check and 7th place out of 60 boats. The raffle at the end of the tournament is always awesome. Motorguide trolling motors, Mercury oil, Mercury Fury props, Ducket rods and TH Marine product just to name a few and a 1/2 day trip with BigBaitBailey guide service (paul bailey) that i ended up winning. Already looking foreword to next year for a little redemption !!