RB Bass Outdoors angler Vern Westberg and his partner Tony Prophet just took 4th place at the Wild West Bass Trail tournament of champions on Lake Don Pedro Oct 2nd and 3rd. On Wednesday and Thursday during prefish they fished main lake points, secondary points and cuts leading into coves. They did a fair amount of driving and graphing looking for bait, fish and busting fish. They were able to catch a limit of fish everyday on a few different baits but the Strike King flutter spoons, 3.8 and 4.3 keitech in electric shad or rainbow shad on an underspin and also a 4.5 inch prism shad roboworm on a dropshot were their top producers. They would fish the spoons and dropshot around schooling bait and fish. Then throw the underspin when fish were busting. Friday they stumbled onto a spot that had bait and the right size fish they needed. Tony made a cast to busting fish with the underspin and on his first cast managed a 5.04 pounder, so they instantly left that spot for tournament day.

Day 1 of the tournament they headed to their spot and begin to grind away, Fishing those same techniques they had put 4 small fish in the boat by 12:30. At that time they decided to make a move and return to that spot later. After making a couple stops at different areas with no luck they returned to their original spot around 2 pm. As soon as they pulled up first cast with the flutter spoon Tony hooks a big one that came up and threw the hook.  Over the next hour and a half it was lights out fishing. They caught their limit fish and proceeded to cull out every one of their fish. They weighed in a day 1 total of 11.56 which had them sitting in 6th place going into day 2.

Day 2 they went straight back to their spot which they would spend all day on. Starting off throwing spoons again Vern catches a small 14 incher on his first cast. They could hear fish busting in the houseboat slips just down from them. When they moved into position Vern made a cast with an underspin and instantly hooked up to something big. It took him for a ride under the dock system and wrapped him on the cable eventually coming off. Vern managed one more fish on the flutter spoon and then that bite had completely died. Vern and Tony began throwing the dropshot around dead sticking it and managed to grind out a decent day 2 limit that weighed 10.06. Giving them a 2 day total weigh of 21.62 which was good enough for them to finish in 4th place. What a way to end their season. 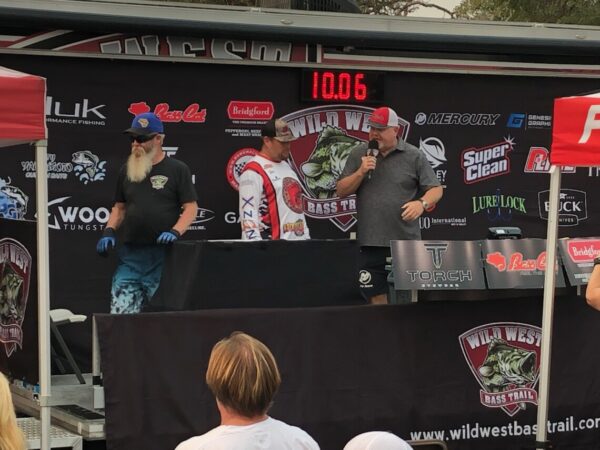