So here it is Monday, the 20th of August, and I’m excited to call and talk with Sam West of Fort Bragg, California. He and his tournament partner, Jack Greco, who is from the Bay Area, just placed 3rd last weekend, in the Yuba-Sutter Fishing Club and Lake County Fishing Club’s Tournament at Clearlake, California, who’s Benefactors, were the Mendocino Complex Fire Victims in Northern California.

Sam is a 17 year old senior at Fort Bragg High School and would like to attend Cal Poly for College (they have a bass team, go figure) and maybe major in marketing….you see where he is going with this Right? He started bass fishing at 13, through a mentor of his, Carl Keller, because neither his dad nor his mom fish. It’s something he just wanted to do and Carl taught him all that he knew about it.

This was a typical one day tournament, best 5 fish limit and they had an 18 boat field. Sam, Jack and Jiacomo were smart, as they came over the day before and stayed at Paradise Cove, so they could do a few hours of pre-fishing. That evening they went out and threw Canopy Grenade Jigs on rock piles just to locate fish. I might mention here that Sam is also on Staff with Canopy Grenades, as I am. These jigs are catching machines. They called it a day after marking a few spots as their time was limited.

An early rise for tournament day to launch out of County Park, they found the air still filled with smoke from the Mendocino fire. How they got through the day breathing I’ll never know. The water temperature was 80 degrees, not much wind and clarity was about 3 feet. They got rods in the water right away, as they fished top water near the ramp. Sam said they threw the River 2 Sea Bull Wa frog at first and hooked up some keepers. The top water bite for them only lasted about an hour, which surprised me, as our bite lasted to about 9:30, so they took off for the rock piles that they marked the day before and flipped Canopy Grenade3/4 oz Jigs in 15-25 feet of water. Sam wouldn’t tell me his colors, though I told him mine…..So now I know who the smart one is here. For more success, they switched to drowning creature baits Texas Rigged and found success at that as well. Notice here he didn’t tell What creature baits, lol.

I didn’t have a chance to talk to Jack, but Sam used his Dobyns 736 for frogging, his Dobyns 734 for jigs, matched to his Curado K, he also used Dobyns 766 for flipping which they did a little of.

I asked Sam if he had any inspirations in stepping up to fish other venues like the BBT, WWBT, or join a bass Club like the RB Federation Nation, so he could make a move later on into the TBF or FLW. He said he is contemplating fishing the WWBT next year but hasn’t made up his mind yet, because he does know his school schedule yet.

Oh….what was the bag they produced? It was 14.74 pounds for 3rd place and had the #1 big fish, which weighed just under 5 pounds. Winning weight was 18.25 lbs. He said all in all, they had a blast and they raised over $700 for the fire victims. 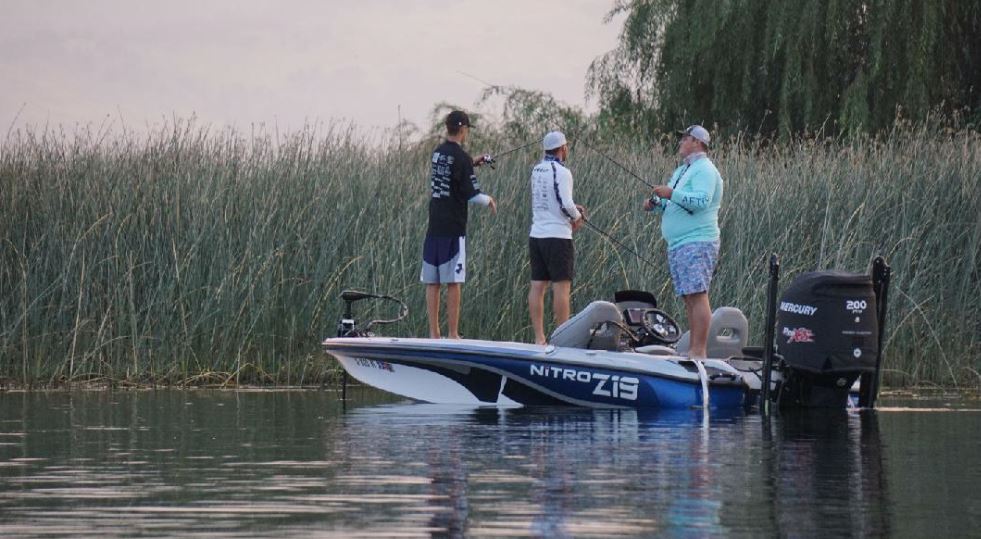 Congratulations Sam West and Jack Greco from RB Bass (rbbassfishing.net) on a well fished tournament, we look forward to hearing more from you two in the future.