So I decided to do more fishing charities this year and I started with the high school tournament and yesterday I was a boater for the 2018 Cast for Kids Fishing Event at Folsom Lake. This is an awesome National event taken place across the USA at different venues, dates and times.
I rolled out at 0430 to get gear together and fuel up. It was a short drive to Folsom and met up with the rest of the boaters and Todd Stanley and Brent Pierce who volunteered to put on this event (go to our Facebook page for the live feed interview). With signing in and helping where we could, we picked up our kids and parents for the morning fishing. I drew Dottie Nicholson and her son Dominick, who is 12 years old and has a rare disorder called Fragile X.  He is quite a remarkable young man and loves to fish. 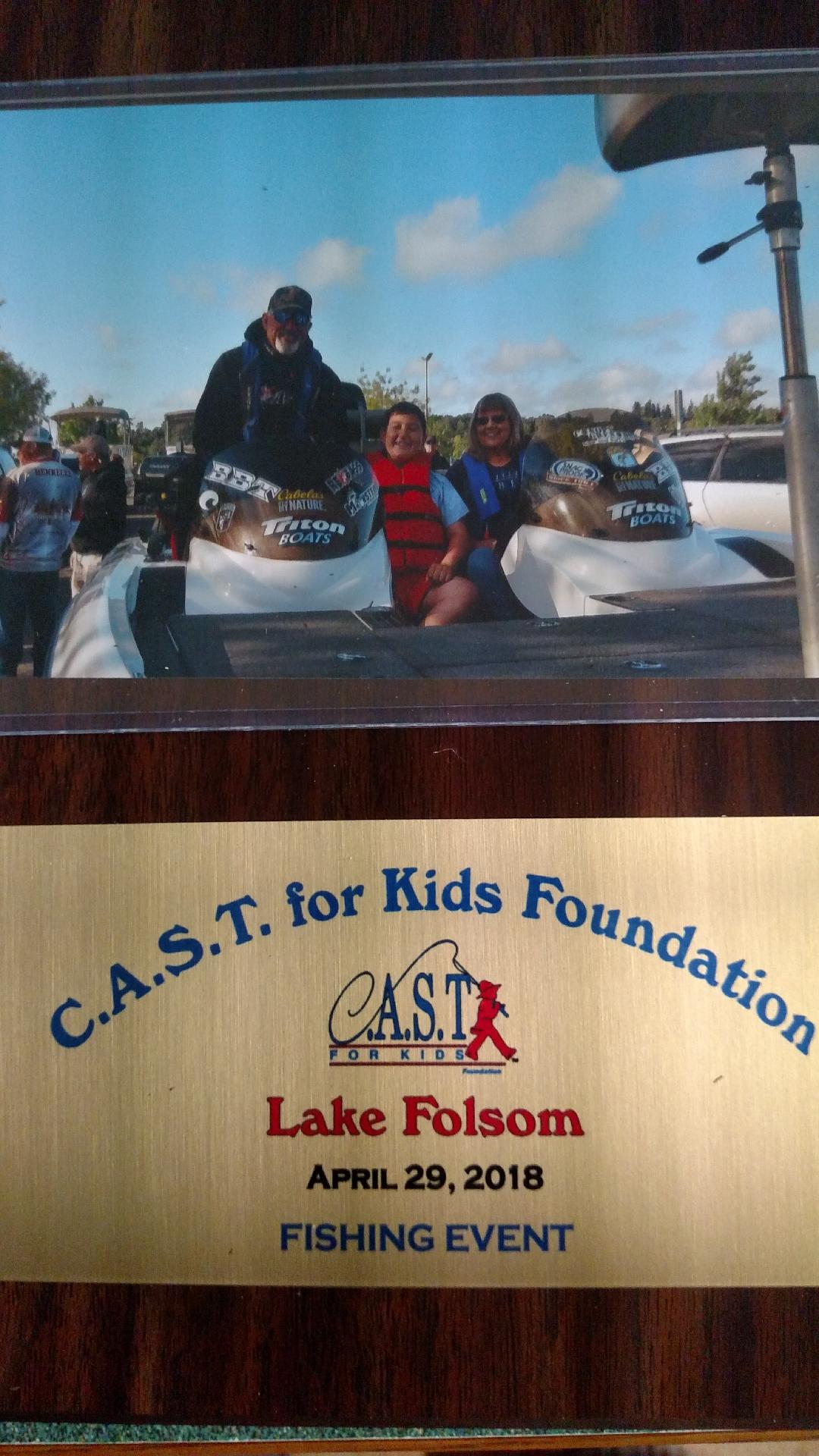 I have not been on this lake but once, maybe twice in the last 50 years so I had no idea where to go or what to use, so winged it and figured it out along the way. Dominick got excited everytime we got up to 67 mph, loves going fast. Before taking off the second time, I reach back and grab a brand new Skelton Buff for him. WE put it on and took a few pics and blasted off again. He was pretty excited about it and  I don’t think he took that off until lunch.  We headed up stream on the North arm and spotted many awesome places to fish trying to stick to main lake rock points out in the wind. This proved to be to much for Dominick, as he isn’t accustomed to the rock of the boat in rough water, so with an onboard vote we elected to search for calmer water. We found some that offered the same setup out of the wind. With Dottie’s prompting I picked up a rod to instruct Dominick in the “how too’s” and got smacked immediately on a rip bait. That got Dominick excited but to no avail as he was not getting bit. Now my mission was to get him a fish. We switched him to a small squarebill and threw that for half an hour and still nothing. We switched him to a medium diving crankbait and still nothing. Ok, that’s it, with time running out I was desperate for him to get a fish. We snuck back into a small bay out of the wind. and I grabbed him a Neko rig and went to bottom. Now you have to understand that with Fragile X Dominick doesn’t have the sensitivity of touch like we do on bottom, because he shakes, but after several minutes of instruction, he surprises me and hooks up a nice 2 pound spot. 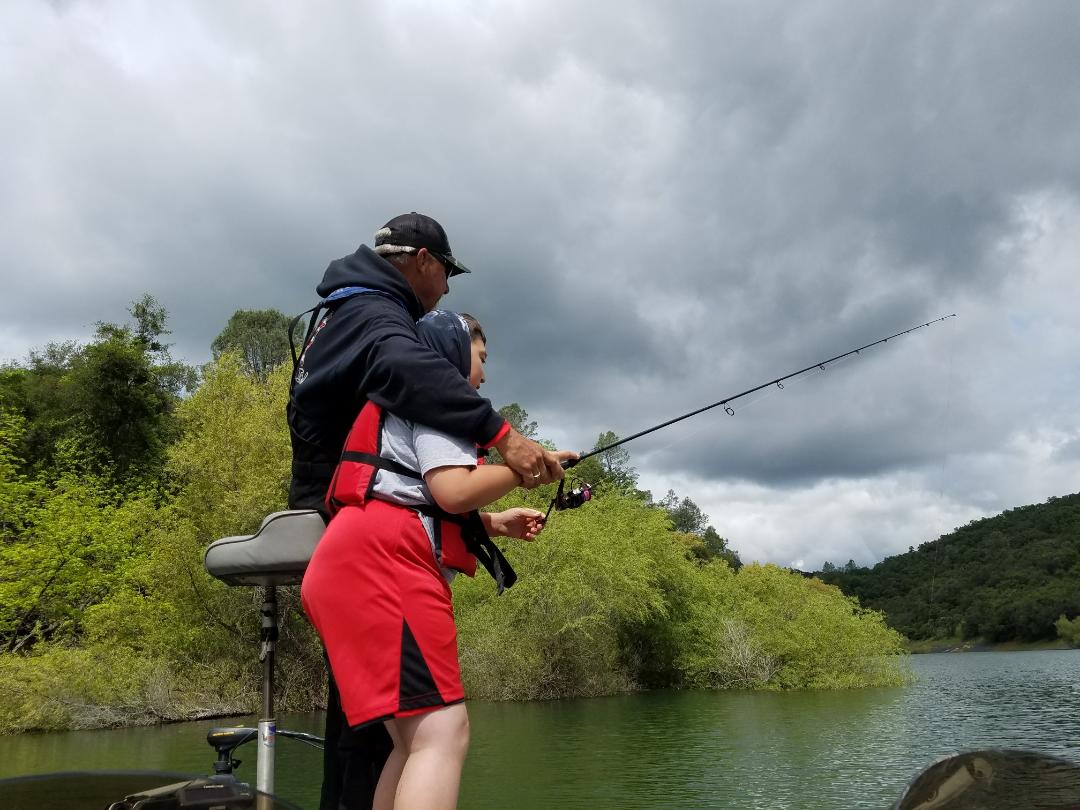 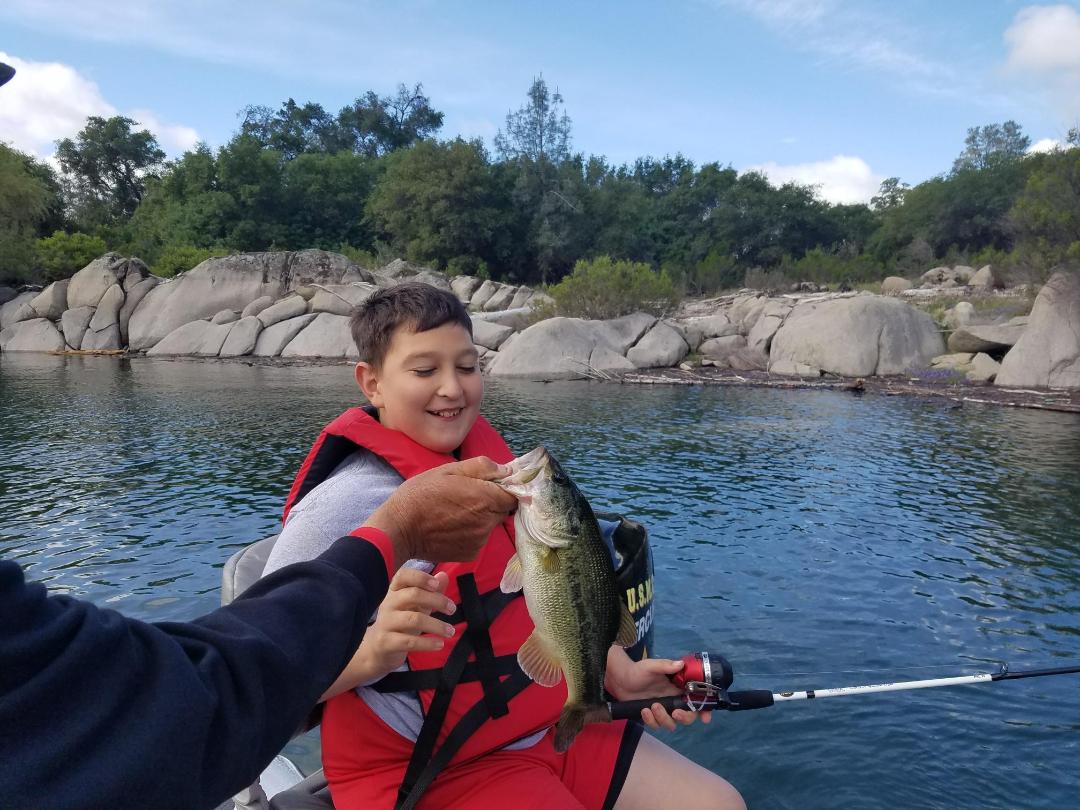 Not only was my whole day made so was his. Not 20 minutes later time was up and we headed back for boat recovery, lunch and awards. After that fact, I am back at the ranch cleaning up gear and boat and Dottie sends me a picture of Dominick fast asleep in the car…….wearing the Skelton Buff lol. 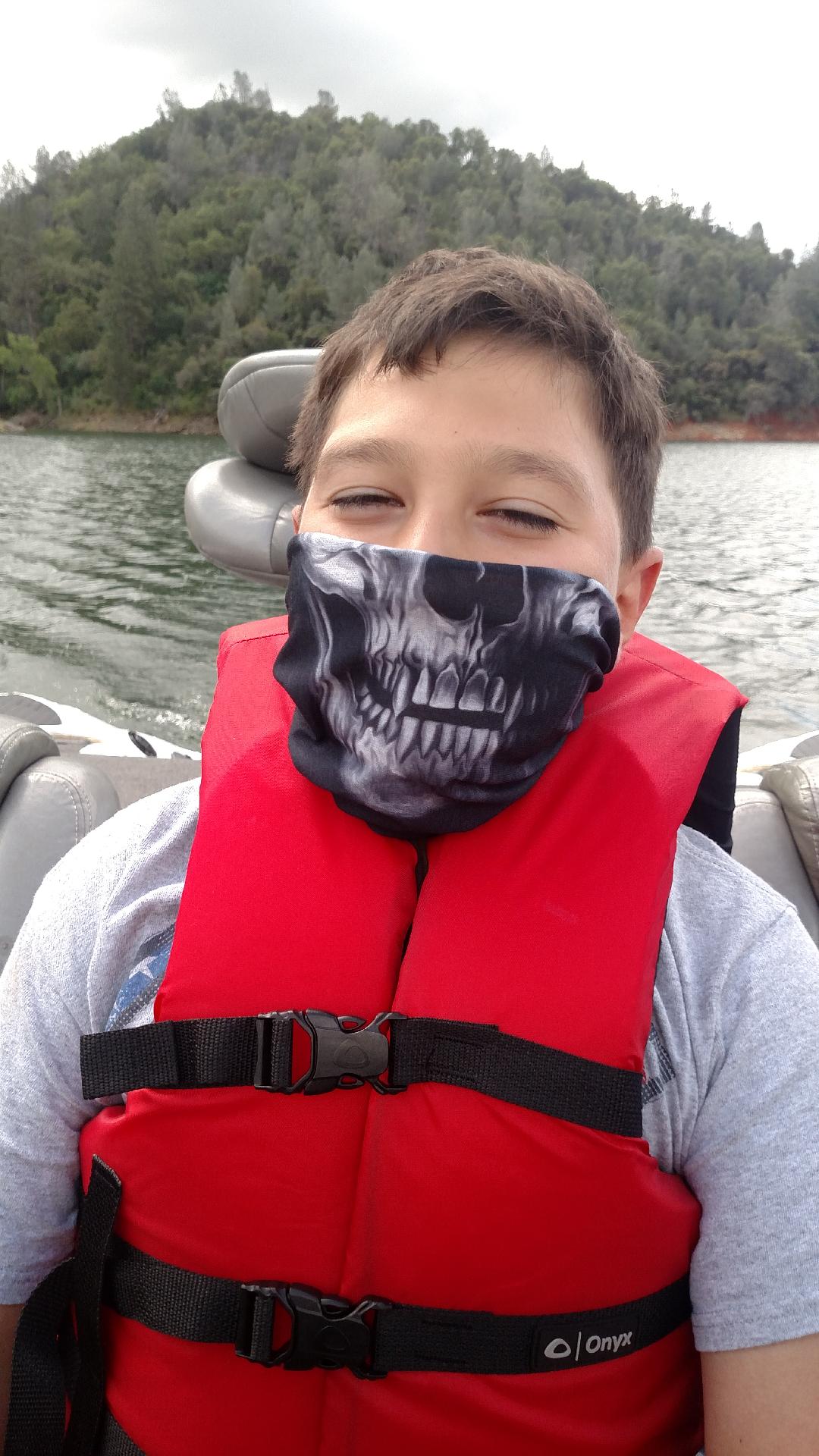 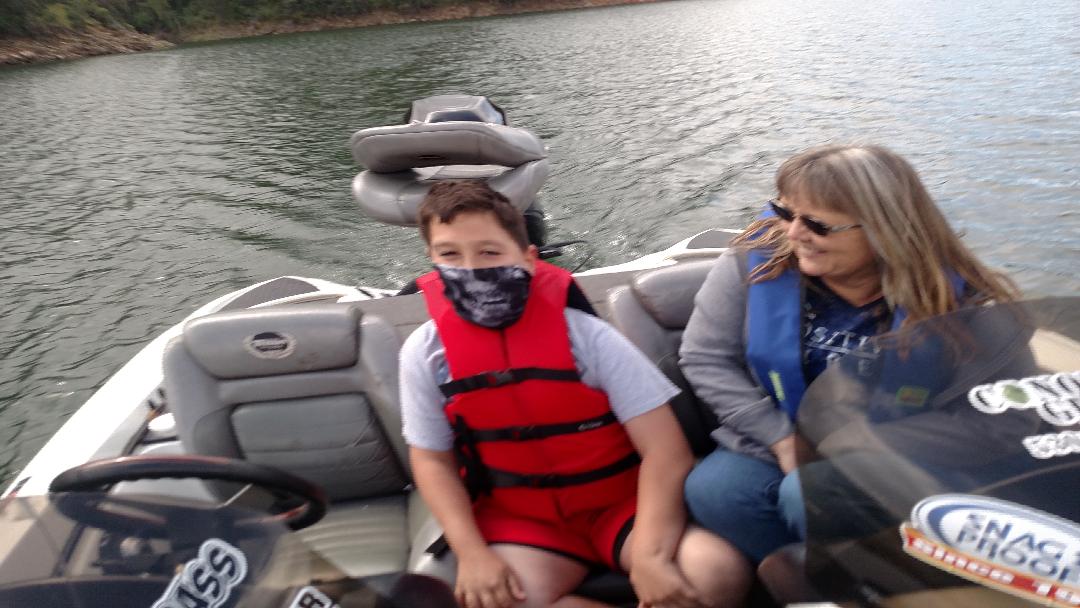 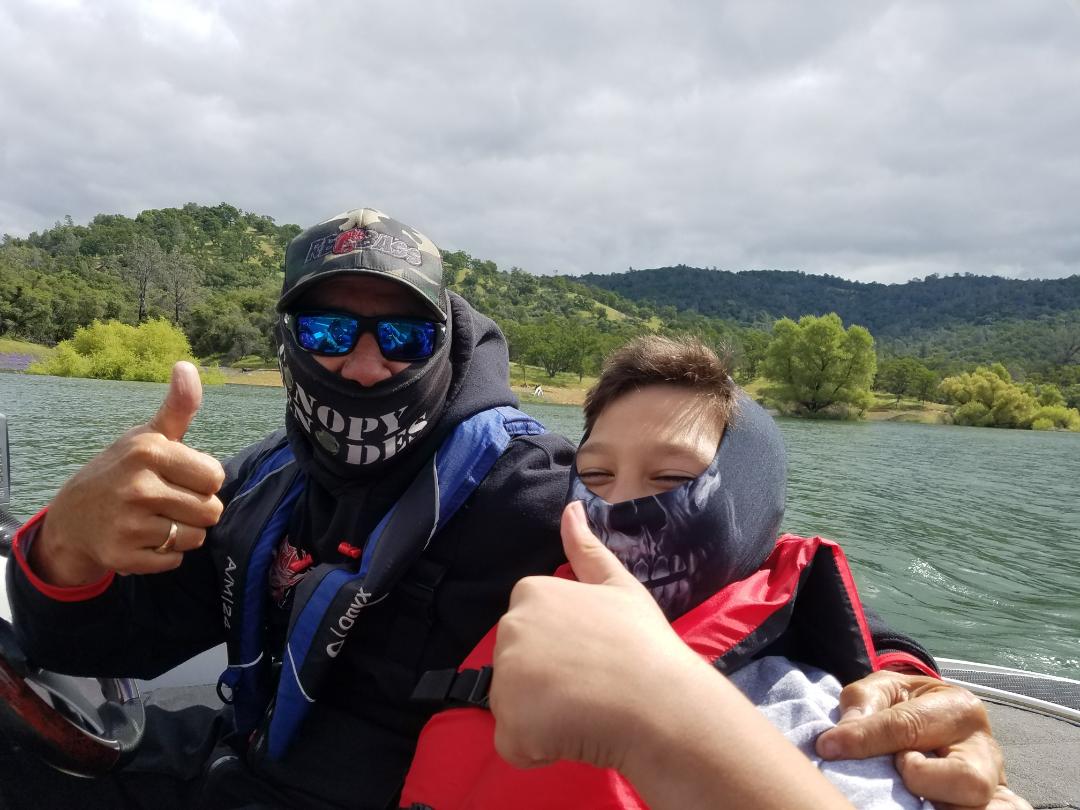 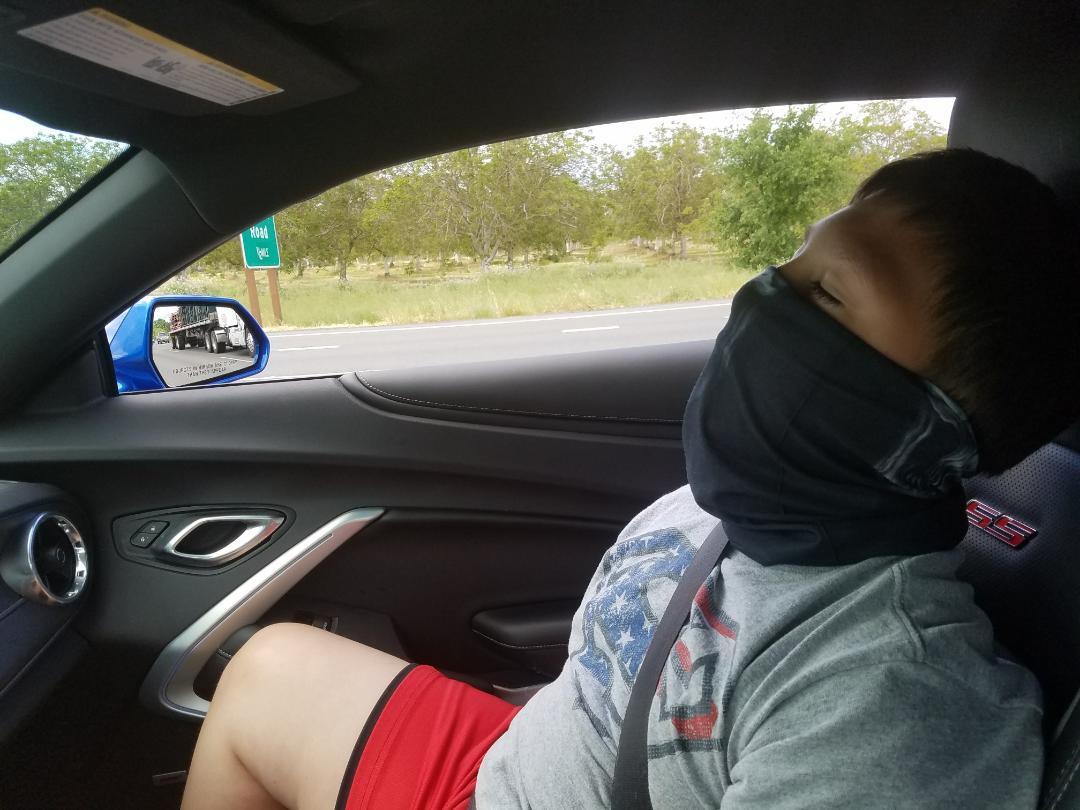 I have to give credit to Todd Stanley and Brent Pierce, for how well they organized the boat recovery for the boaters and the entire event directed towards the kids in having fun. I look forward to doing this again next year!
Mike Rogers