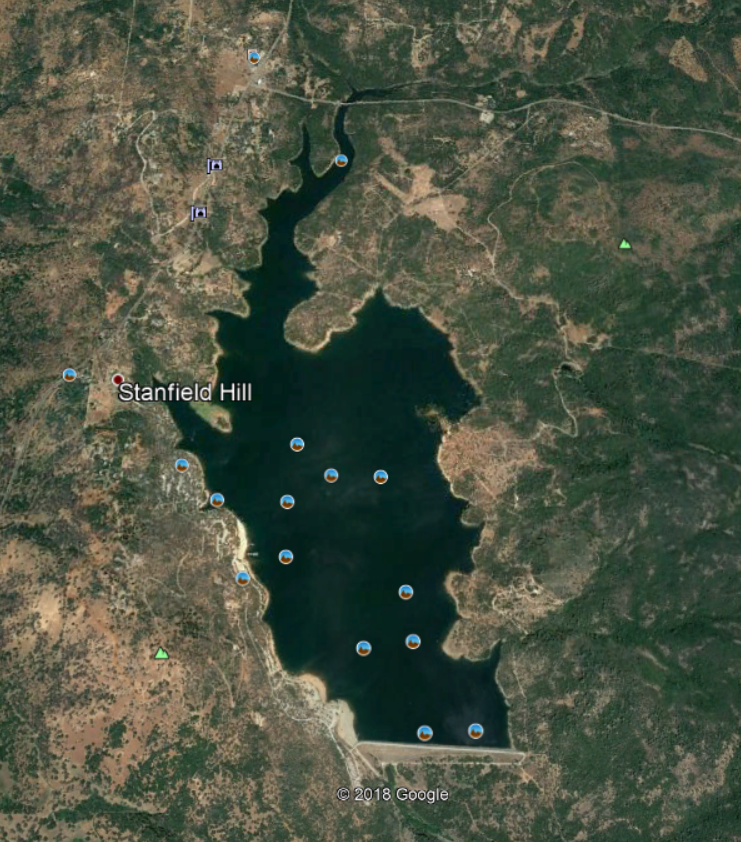 A lot of work went into this RB Bass get together, not just by Ron Howe, who is a master at it, but the Anglers that showed up as well, with their time, money and effort to be there.

Chris Perez and I hit there mid day to set up there area now known as the Bunker, with pop ups and two huge tarps and get it all lashed down, because the rain and wind was coming shortly. Thanks Randy Walker for your pop up and assistance.

Chris and I decided not to put the effort into effort to launching the boat and fish for a few hours, but stay at camp and attend to more pressing matters, like a fire and drinking….we are masters of this.

First night there was spent with RB brothers Mike Tremont, now known as Doctor Silky, No…I can’t or won’t go into details,  the visual is still haunting me. Then there was RB brother Ron Howe, known for his prowess, not just on the water, but his way around the Weber and his legendary culinary skills. Also Chris “the fish magnet” Perez, known for his acute ability on fixing his grandpa a cocktail or two, and finding fish when it counts! The last of the hoodlums for that evening was RB brother Randy Walker, Mr. StormerR himself, I call him Mr. One Liner, because he is quiet and reserved young man, but throws out one liners that just cracks you up. He was a little off this trip, due to slow recovery from the flu, but funny. 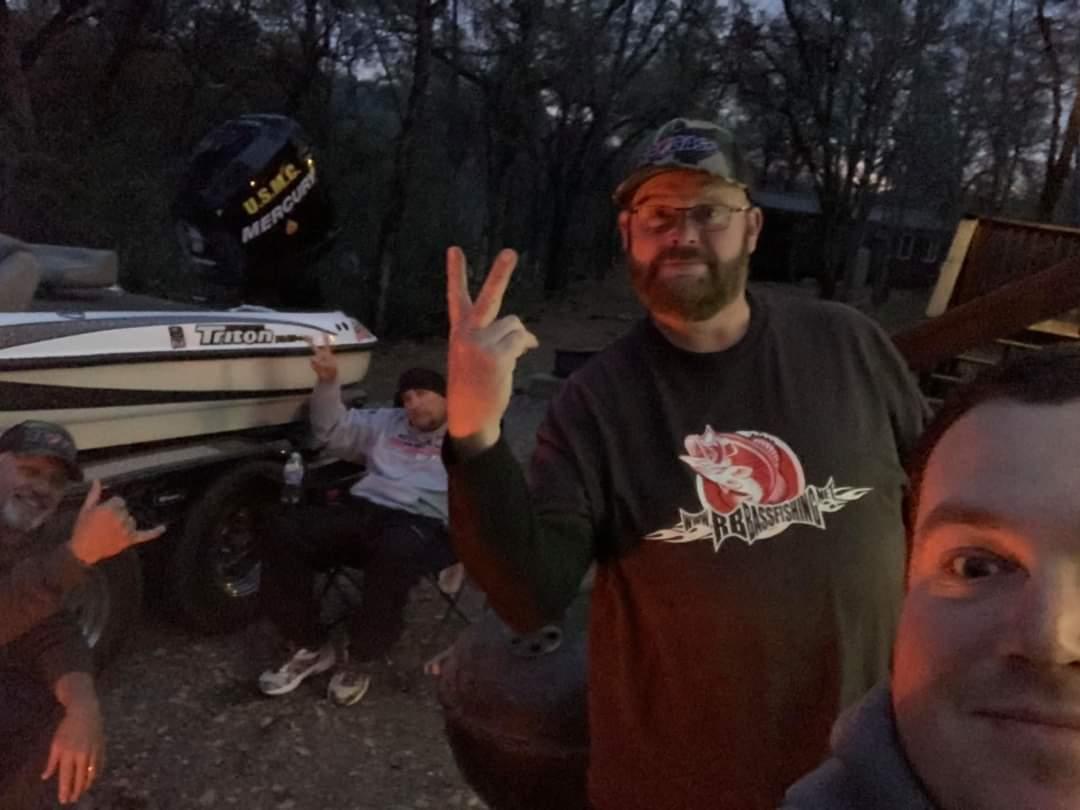 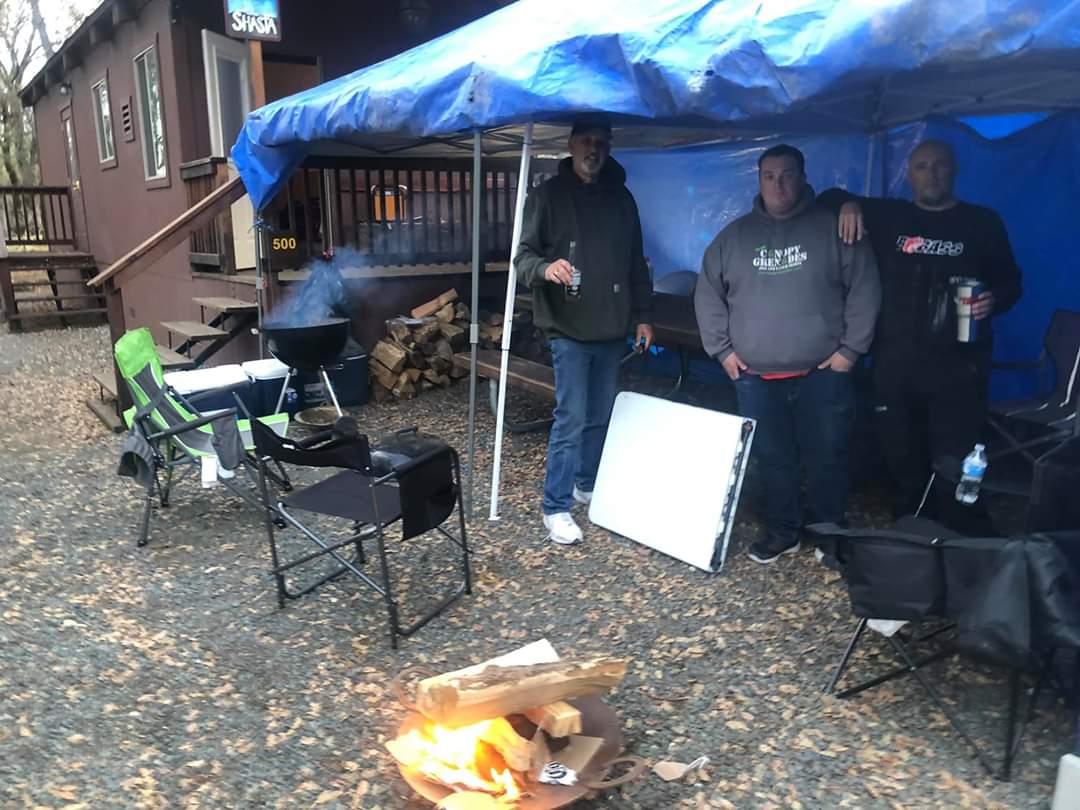 The evening fell to blustering wind and torrential rain, to all avail, as we had a ripping fire going in my portable fire pit, as well as Ron’s BBQ and we were tucked under the Bunker, which was the pop ups,  engulfed and layered with my two huge tarps.  The dinner table was assaulted in layers or shifts, as Ron cooked up Tri Tip, Brats and Asparagus, while I fired up my Cajun Classic Deep Fryer and deep fried spiced rub Chukar, that was supplied by Randy Walker’s lovely wife, as they dont eat game meat, but love hunting them with their dog. Side note…Randy eats game birds now lol. 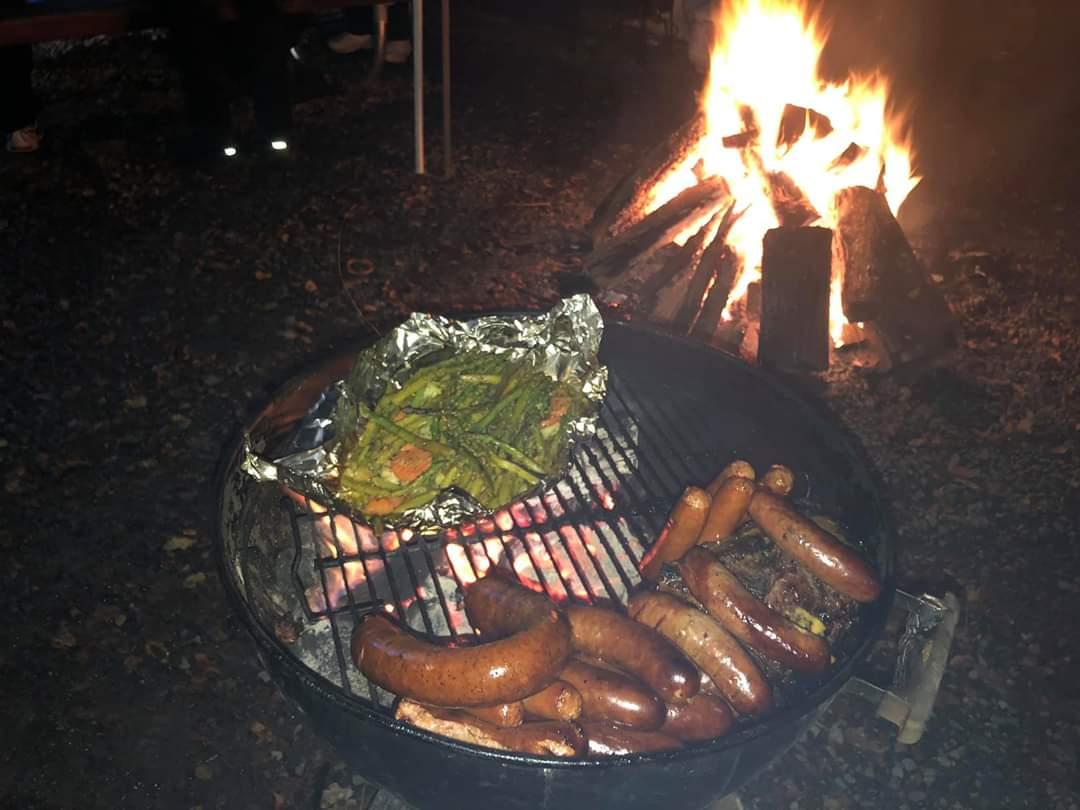 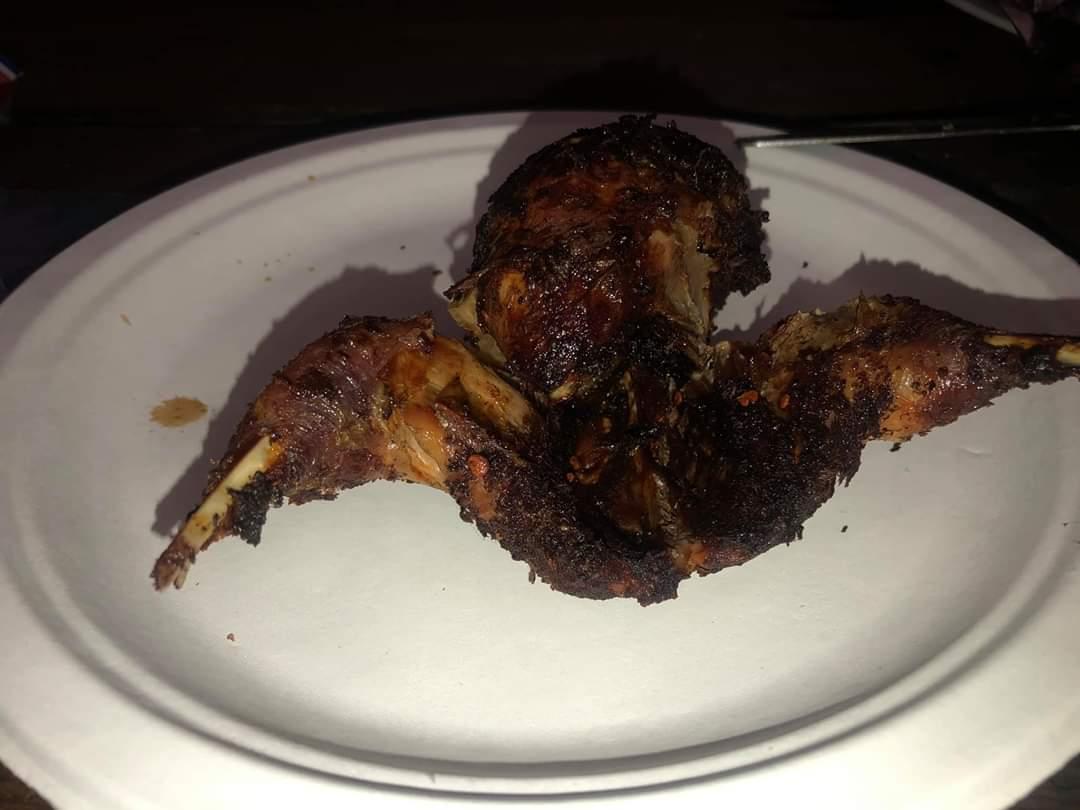 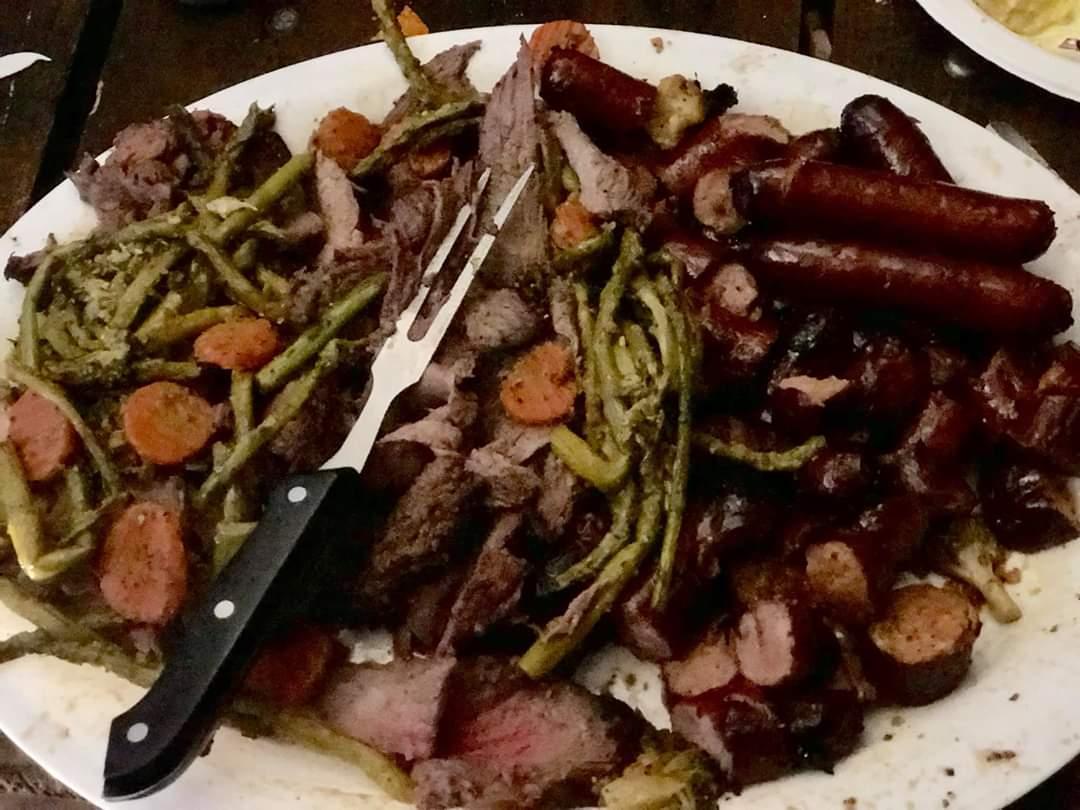 Doctor Silky also brought a salad to share, which was welcomed by several of us healthy eaters. There was venison chili I brought and marinated chicken we never got to. The second night was more of the same, except I added French Fries to the mix, and sausage stuffed bacon wrapped chukar, I didn’t even bring out the chicken I marinated, as we were stuffed, and 2 more RB brothers, Ryan Hall and Dominik Mohammed that showed up to partake in the fun. Thanks to Dominik bringing Bullet his dog, what a lover! 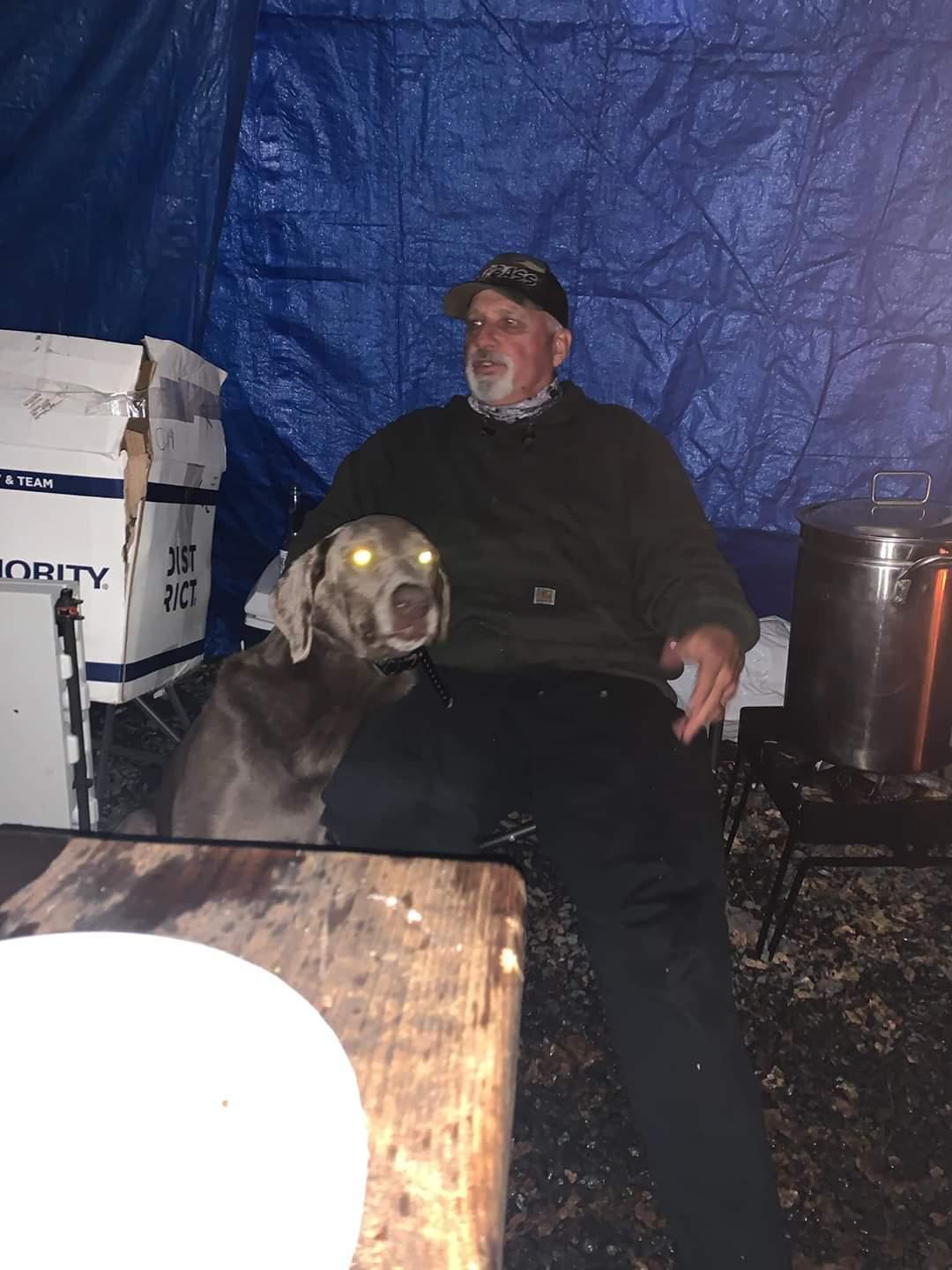 The only problem was that I was the only one that brought Whiskey! You boys are slackin, not that I needed anymore, as they started calling me Stumbles late in the evening. I was glad to provide some comedy relief to the festive air!

Fishing the lake was wet and cold, with 20-25 mph winds and blistering rain. Thank God for warm dry gear! I won’t lie, it was a tough 2 days of fishing in those conditions, especially when the fish weren’t biting. I threw an A-rig, an HGrub, spinnerbait, single swim head Keitech, which i thought would be a killer,  threw a drop shot, ned rig, rip bait, and the kitchen sink but they had me scratching my head. I caught two fish all that day, no other bites. Didn’t find any schools, just one here or there. 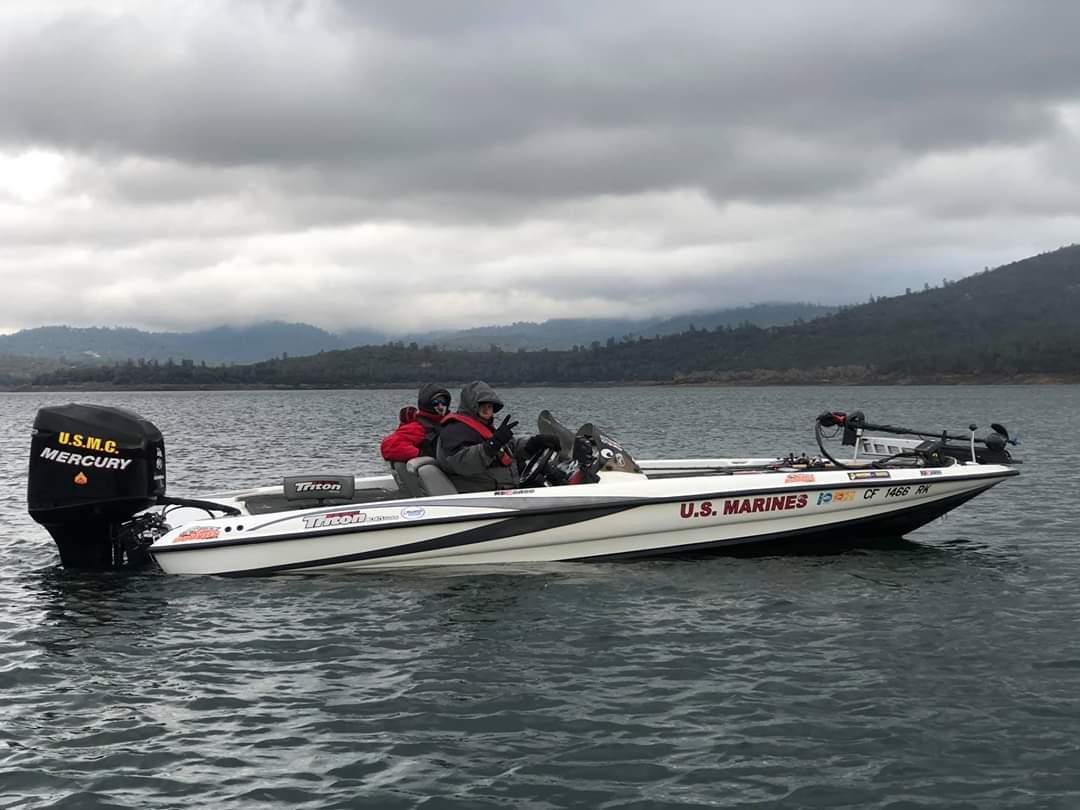 The second day the weather calmed and only got sprinkled on a few times, but the bite picked up. We were catching them pretty good on the A-rig anywhere from 3 feet to 18 feet. The last hour was insane, as we went back to our first cove stop and the fish that weren’t there before had reloaded and some were breaking top water chasing Bait. Chris and I culled our 5 out there several times. Wouldn’t you know it we would find them just before our weigh in. Those culls took us to the Win, with 11+ lbs for Big Money!. Though Ron Howe got big fish money with a 7.10 lb lake trout…no one said it had to be a bass lol. Chris and I tried to catch them but couldn’t get them to take anything. 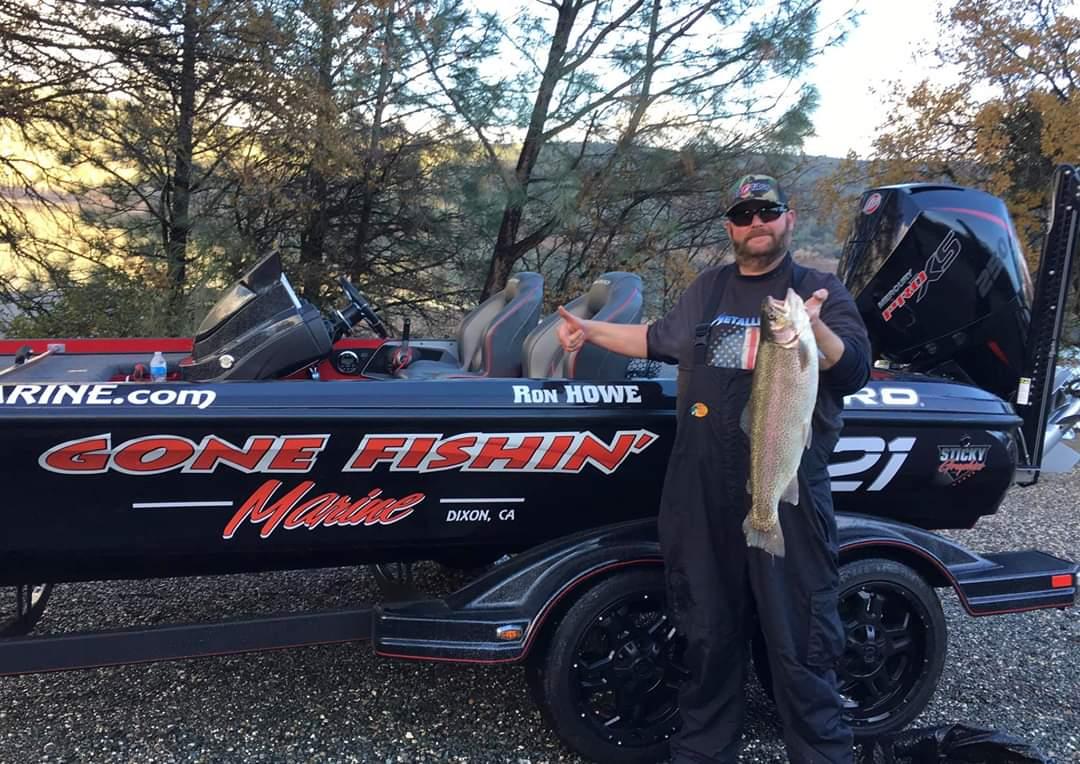 It was a fantastic time, and it’s always a blast with you guys. Thank you all for helping me breakdown the Bunker.  I know some of you traveled a long ways to be there and I for one appreciate your commitment and friendship.  Those of us that missed it, please try to make it to at least one of these throughout the year. You won’t regret it….uh…I gained 2 pounds…just sayin. 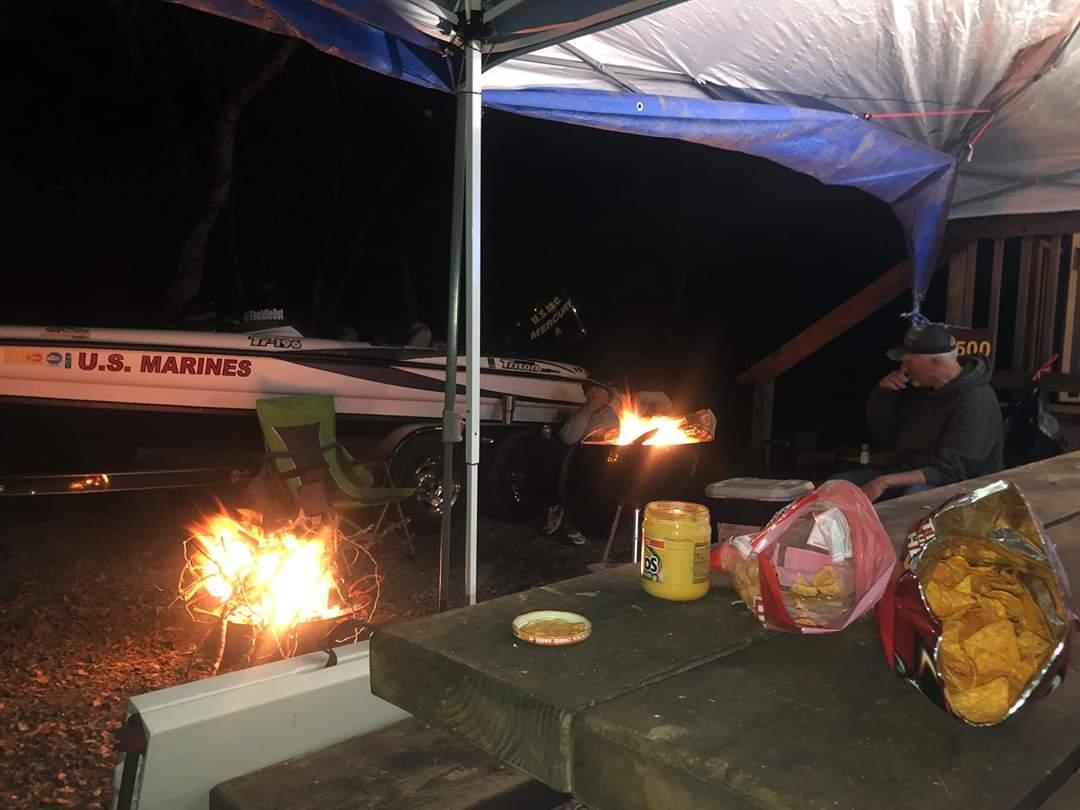 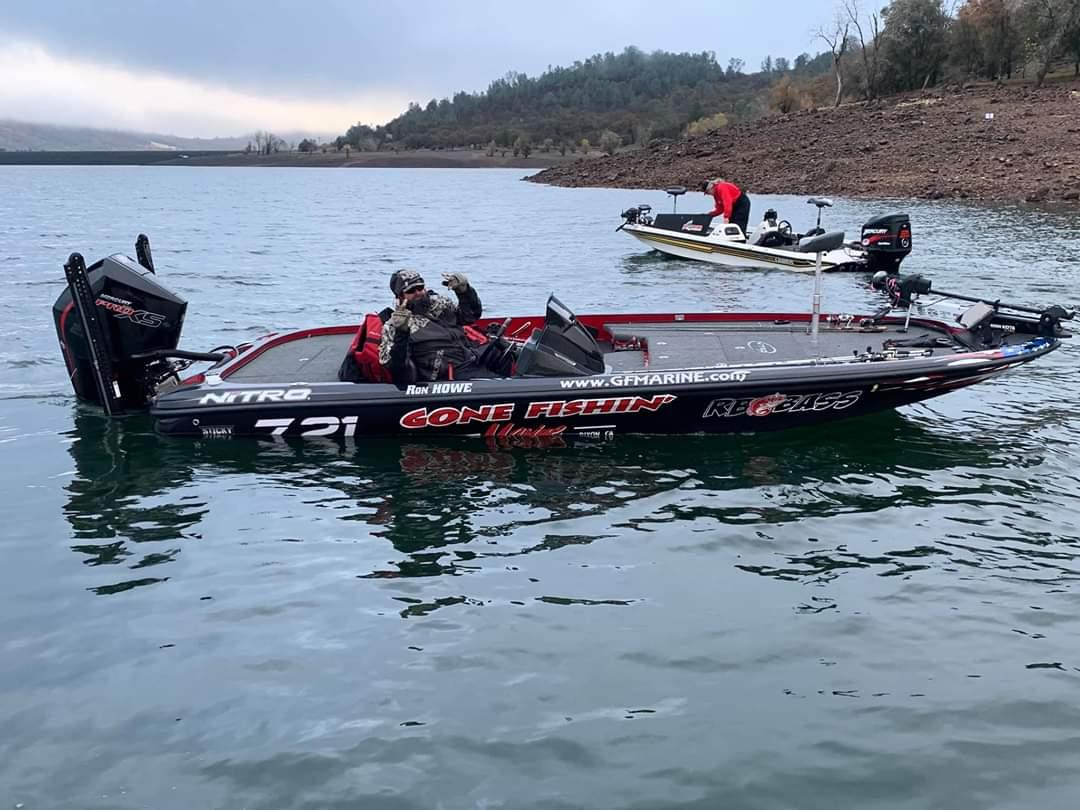