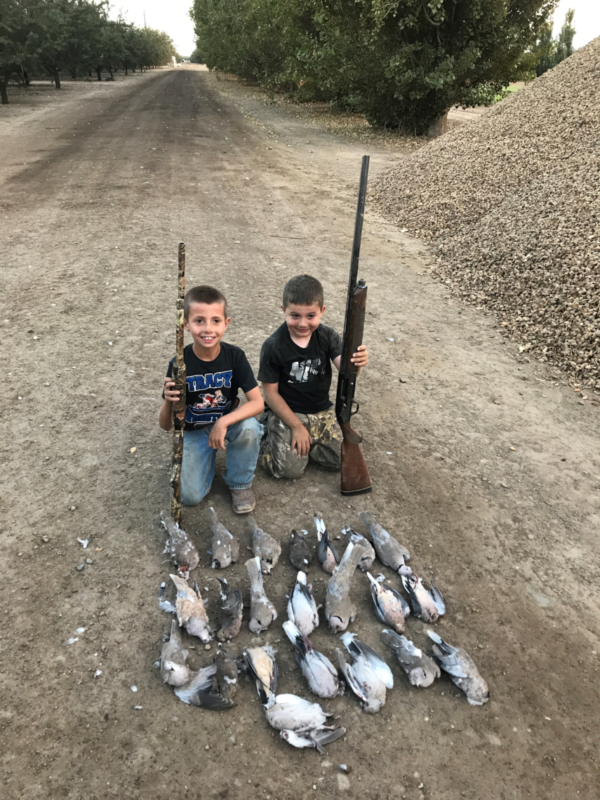 Date: September 5th 2017
Time: 1500-1830 hours
Location: Farmington California
Air temperature: 93-80 degrees
Wind: West 2-6 mph
On September 5, 2017 my friend Clayton Bogetti and I, took our sons dove hunting. We both picked our sons up from school around 2 p.m., grabbed some gear which included plenty of cold water, and heading east up to Farmington California.
The area we were hunting was private land and traditionally we’ve been successful. We started out walking levee tops on the edge of irrigation canals. This technique produced a few morning doves however it required lots of walking which was challenging for two young hunters.
We stopped and took a break around 6 p.m. The flight was fairly slow, and the birds we had opportunities on were flushed from the ground as they sipped water from the canal.
As we stood up high on the levee we could see a constant flight of doves working the edge of an orchard. Only issue was we were on foot and the area the doves were working was at least a half mile away. Typically not an issue but with two young boys ages 6 and 8 it seemed impossible.
We reached the orchard with thirty minutes of legal shooting time left to fill our limits. Fill our limits we did and it only took us two boxes of shells a piece. We ended the hunt with 22 doves total, 15 Eurasian doves, and 7 morning doves.
Overall this was a fun hunt. Teaching two young hunters hunter safety, respecting the land, and the art of hunting, is all the more gratifying then harvesting the animals we were hunting.
If you have an opportunity take a child hunting or fishing, because  today’s youth are tomorrows leaders. Like, comment, and be a subscriber to RBbassfishing.net.