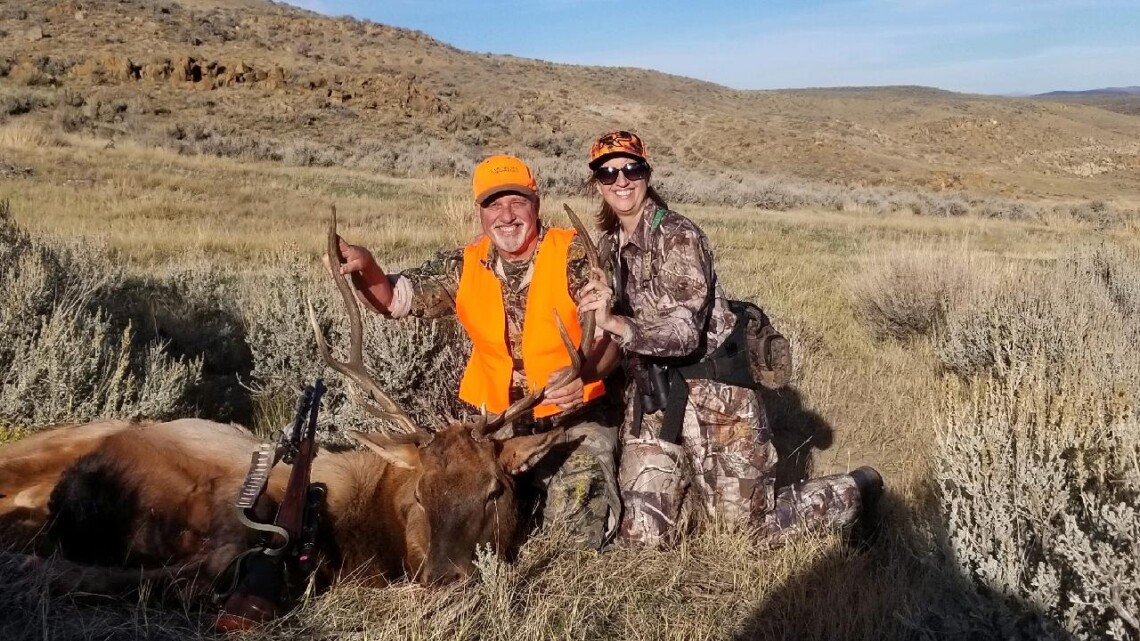 Clouds, then sunny, then snow

Last year we decided to do an Elk Hunt, and considering my age and medical issues, quite possibly my last, so we looked around for an out of state guide service, because my home state is a waste of time.

For a couple of reasons, we settled on Elk Ridge Outfitters in Colorado, just North of Meeker and South of Craig. It’s sort of high chaparral country between 6,000 and 8,000 feet in mostly Sagebrush on the mountain sides, mixed with Box Alders and a scrub oak down low, which you hunt in October and Aspen and Cottonwood up in the higher country 9,000 +, which you hunt in September.

As for our trip, it was a leisurely 2 days there and 2 days back. Our arrival was a little early, so we just drove slowly and glassed for animals. arrived mid day in time to meet everyone, and after a year of planning, put faces to those names. We unpacked our gear  in our spacious cabins of 720 sq.ft. that sleeps 5, but my wife Tracy and I had one all to ourselves. After unpacking we grabbed several guides and sighted in the rifles again just to make sure. This was followed by a great dinner and of course drinks, that you brought, set inside the lodge by the fire. It’s cold outside, with morning temps at 25 degrees. The lodge was spacious, and included a large kitchen, dining area, fireplace, and lounge area.  After all of that, it was off to bed for an early rise to hunt. 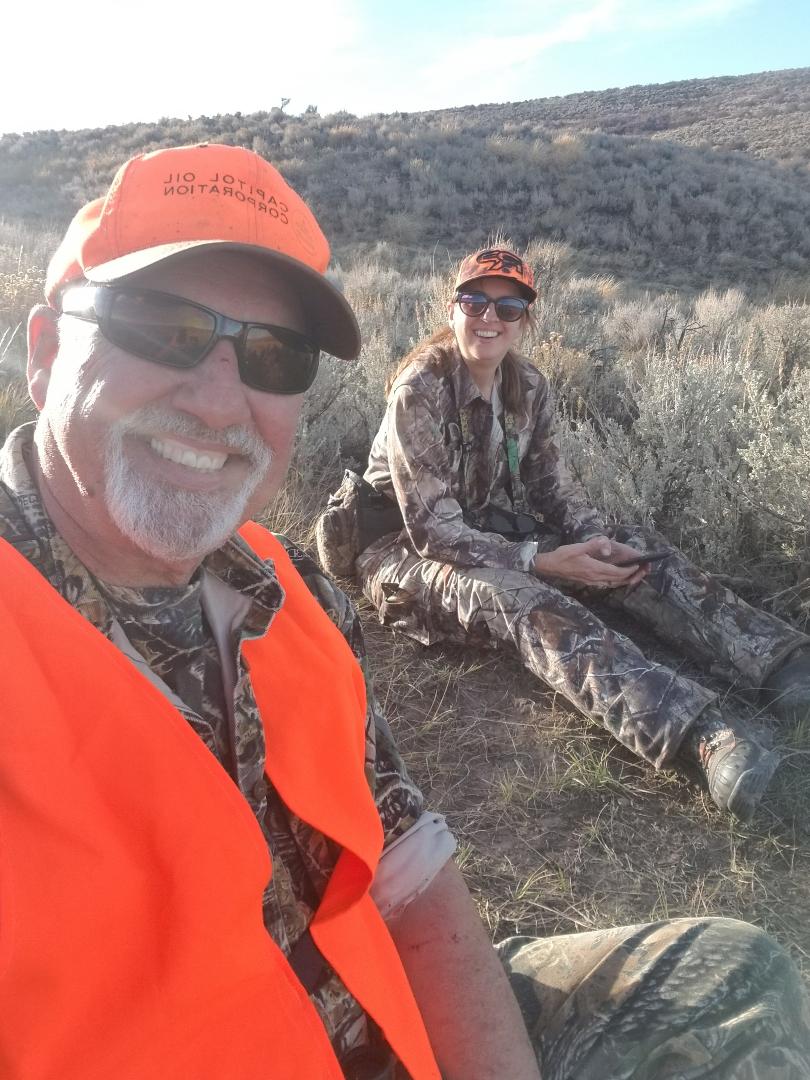 They have approximately 41,000 acres of sage brushed mountains, mixed with Box Alders. This ranch, Morgan Creek Ranch, sits between two of the largest elk herds in the world: Bears Ears herd, estimated at 23,000, and White River herd, estimated at more than 41,000. Because of their carefully-stewarded Ranching for Wildlife efforts at the ranch, more than 5,000 elk winter on the Morgan Creek Ranch of 41,000 acres, while upwards of 3,000 mule deer live onsite year-round. 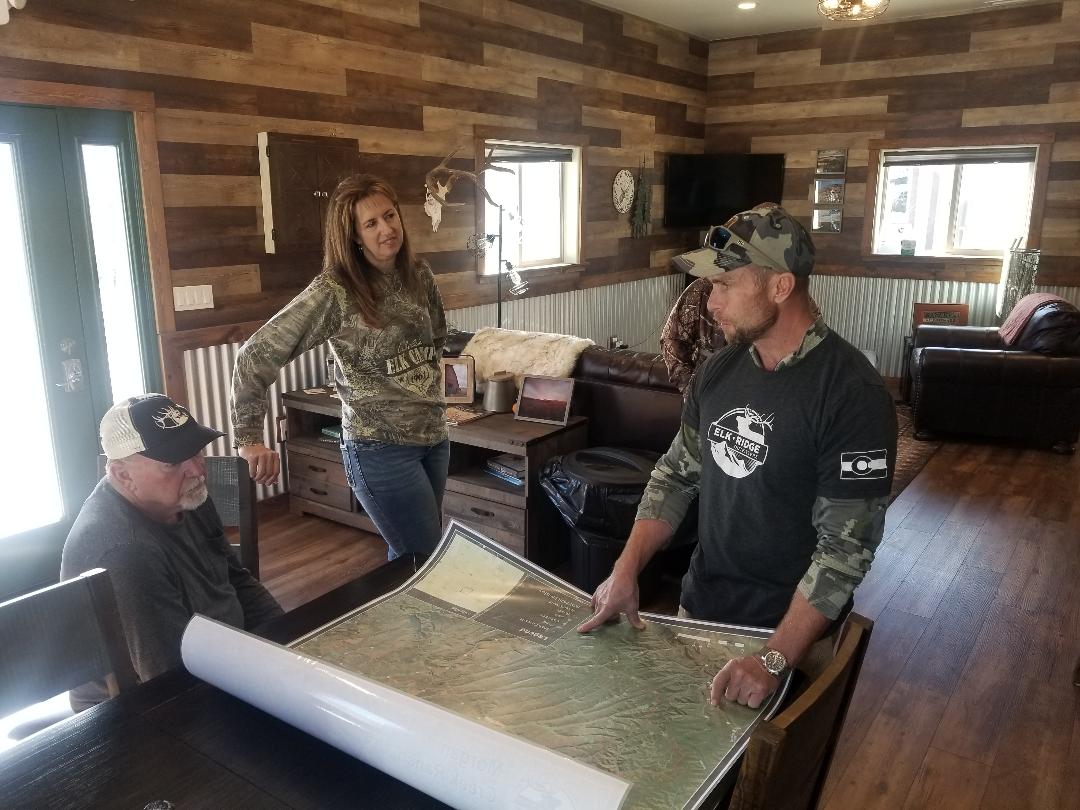 Opening morning, at daybreak and after a great breakfast you found us driving to a selected hunting area we picked the night before with the guides. The huge aerial map they had helped tremendously. We would drive in a little ways and spend hours glassing hillsides, mountain sides, bedding brush and Box Alders. Once we spotted a herd, we would get out and come up with a stalking plan and then execute it. In our time there, we spotted about 6 different herds, and lots of bulls, some young and some huge.  In total we probably saw 200 elk in one day, about 25 to 30 bulls anywhere from 2×2’s to 6×6’s and of those 4 big ones, 7’s and 8’s, but all shootable….if you can get in range without them spooking. 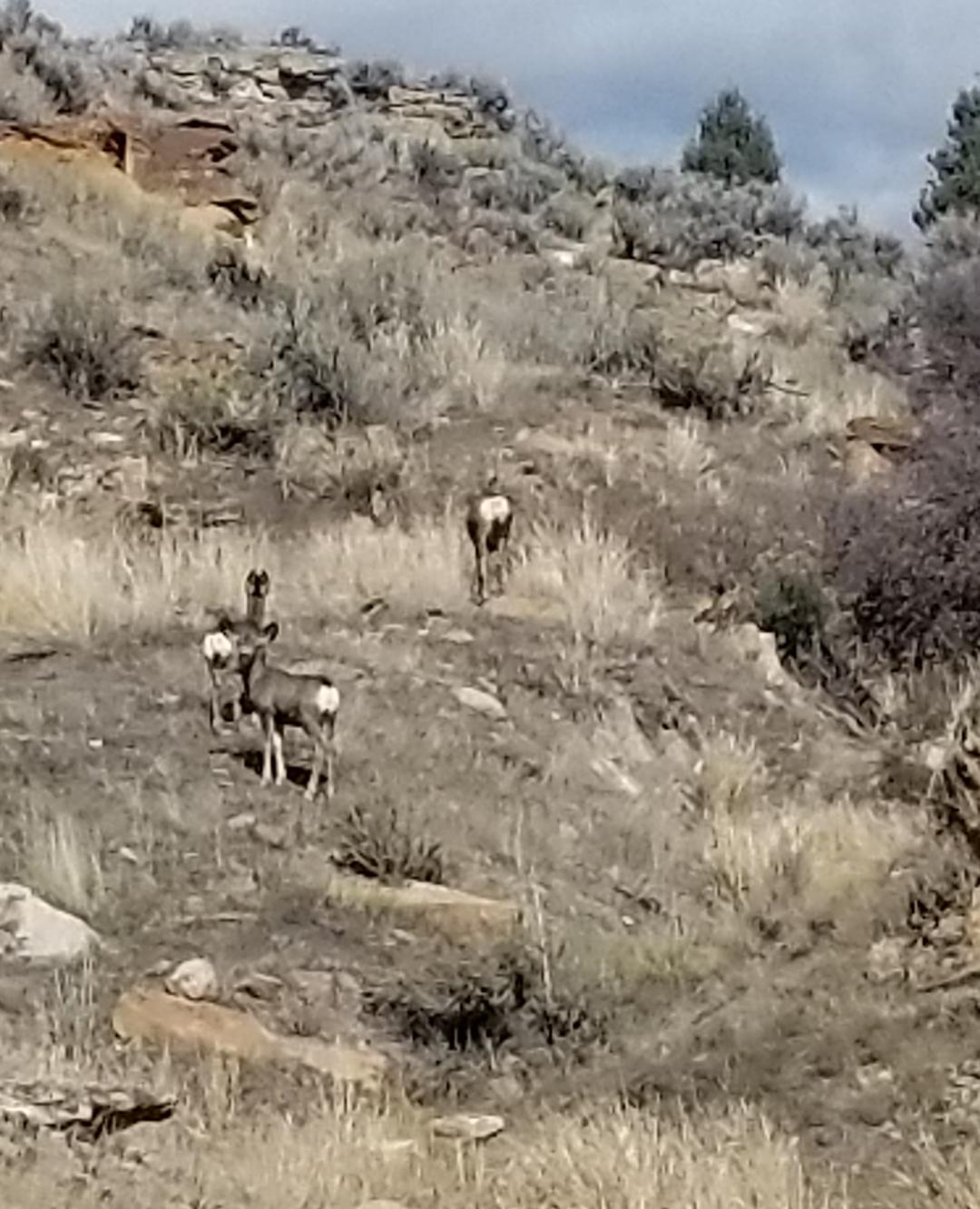 My guide, Austin Seely, a young man of 30 was half linebacker and half goat, and I told him so Lol. He was very professional and concerned about my health and gauged how I was doing by asking me every now and then if I was good to go, and moved on and hiked my butt off. 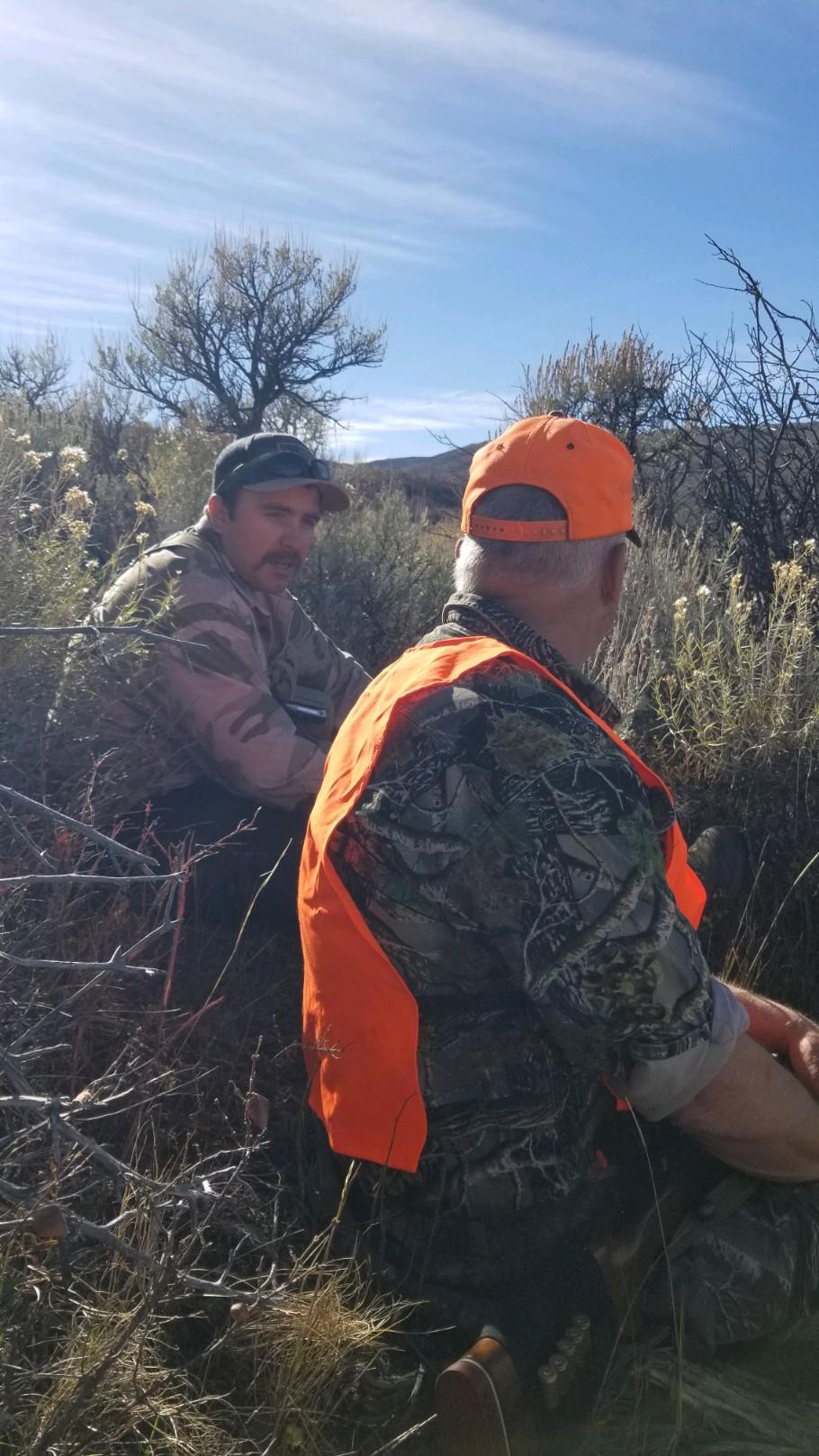 After putting in several miles of unsuccessful stalks it was mid day, you’re hungry so they take you back to the lodge for lunch, drinks and a nap if you want. 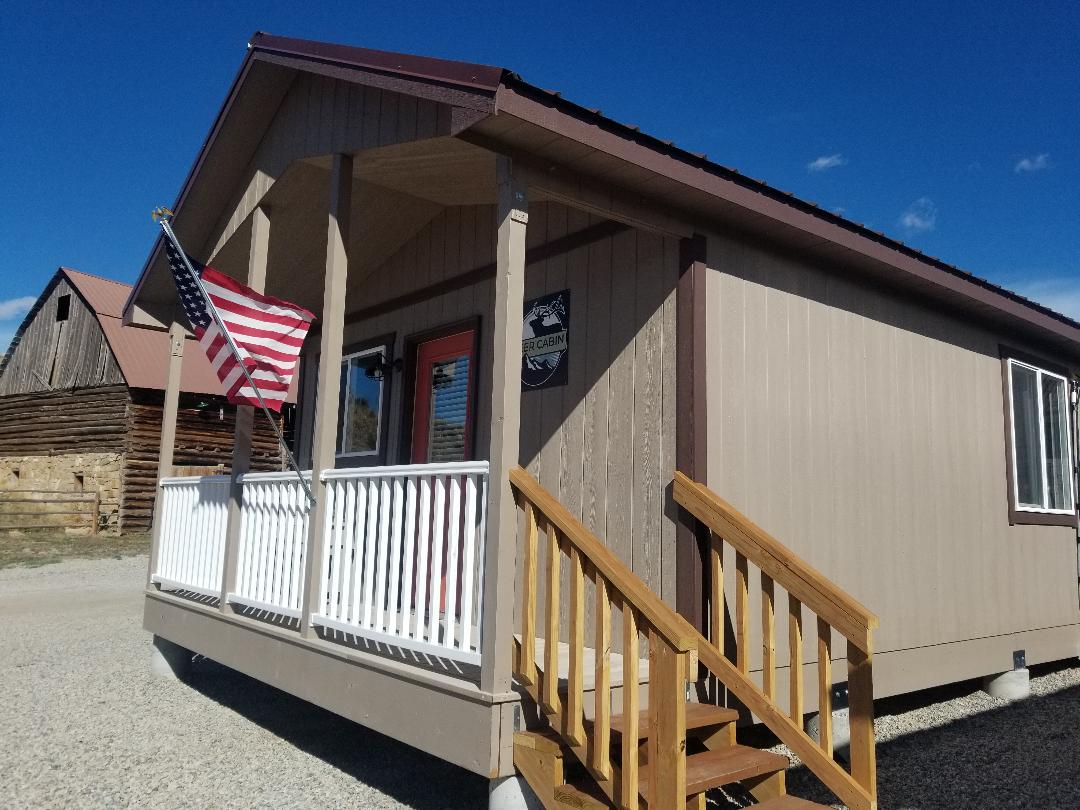 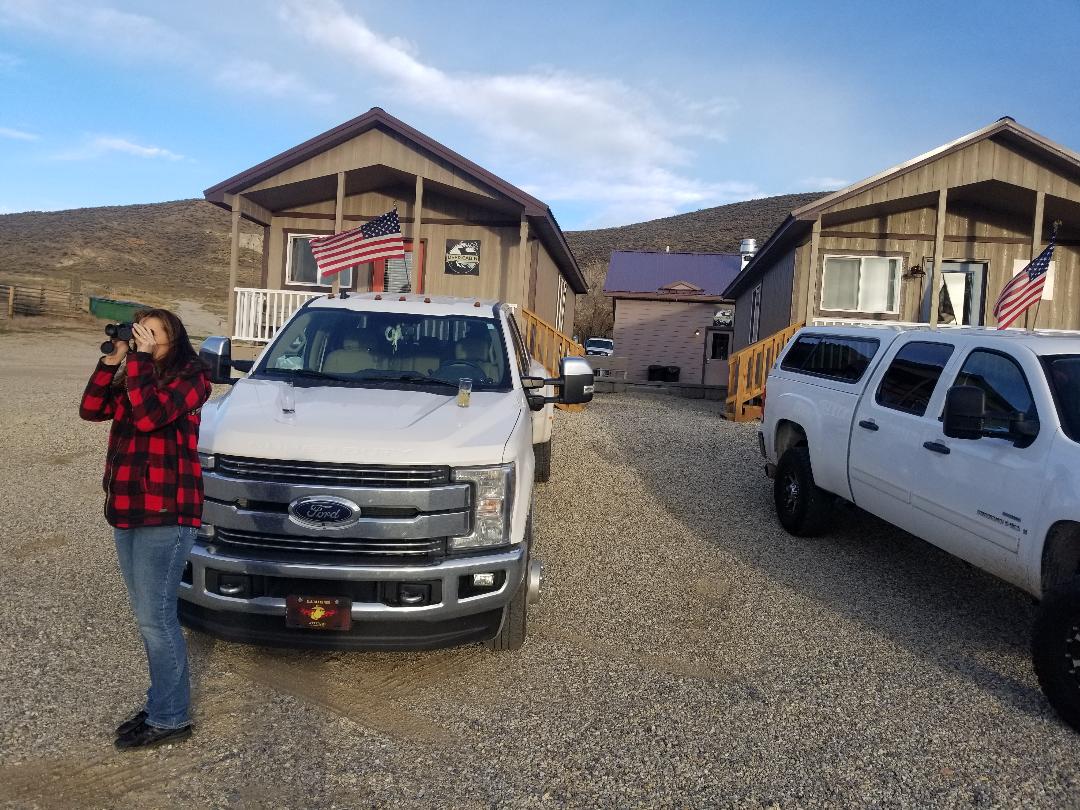 We went back out in mid afternoon and did it all over again. This late afternoon hunt we spotted three more herds and picked the closest a mile away to put a stalk on. We grabbed our gear, then loaded our weapons, mine was a .375 H&H Mag, shooting a 270 grain soft tip, and started the hike. 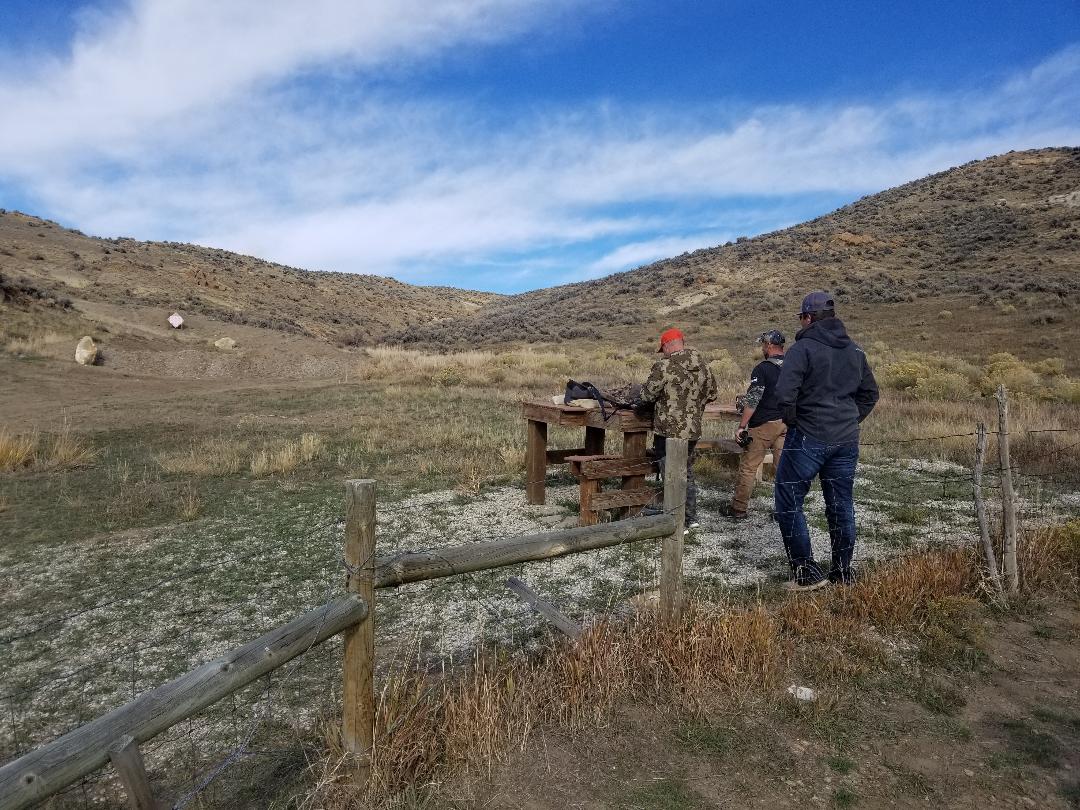 A few hours later with the sun waning, we got pretty close to this herd but they bedded down in the Box Alders so we crawled forward to within 350 yards and sat down and waited hoping they would come out for a clear shot. I haven’t crawled like that since my old Marine Corp days. We sat for almost an hour before they moved. There was a bull here that was the biggest I have personally ever seen. I could count 8 on one side but too much brush to get a fix on the other side. He was HUGE! Ge looked like a Greyhound Bus. Unfortunately when they moved they stuck to the Alders, but they were moving downhill to the grassland, so we snuck back out and circled as best we could. We were more exposed than I liked but there was no other choice but to continue in the sagebrush. If we catch up to them the wind at 20-30 and sun, which is setting right into my scope is going to come into play.

After crawling and sneaking for an hour (hard for an old guy) we came within range of several bulls and cows. The big guy was nowhere to be found. We think he peeled off out of sight in the Alders and moved up the mountain, while the rest moved down. Austin asked me if a 5×5 would do and I said yes, we were hunting for meat not antlers, we’ve already done the antler thing years ago.

We crawled out of the small ditch we were sneaking in to come up to a sitting position and about 30 elk at 300 yards away. One side of my rifle bipod would not extend, not sure why, as It extended on sighting in! Grrr! Austin quickly put his shooting stick tripod out for me, made adjustments and I got on target. The problem here became the wind and sun as I knew it would. The other problem was the bulls were mixed in with the cows. Looking through the scope was difficult because of the glint from the sun, but I picked up the bulls, made a mental calculation for windage and drop, and at that range my 270 grains my drop is 9 inches at that distance. We waited several minutes until both Austin and identified the biggest 5×5 and waited for him to clear the cows. A few minutes later he stepped forward, my safety went off, I told Austin, “fire in the hole” , did my breathing, held high a little above the withers and squeezed off my round. That 375 kicks good so I didn’t see the bull collapse, but I heard that 270 grain hit him with a loud thwack. You hunters know what I mean.  Austin turns to me and says, “he’s down, nice freakin shot”! I said thanks, but it wasn’t that far lol. We see the bullet caught him just below the spine at the withers, so the shot placement and calculations were correct, though I thought it would have hit a little lower. He was trying to get up, but with a spine shot he couldn’t, so I dispatched him with a shot to the head when he quieted down. 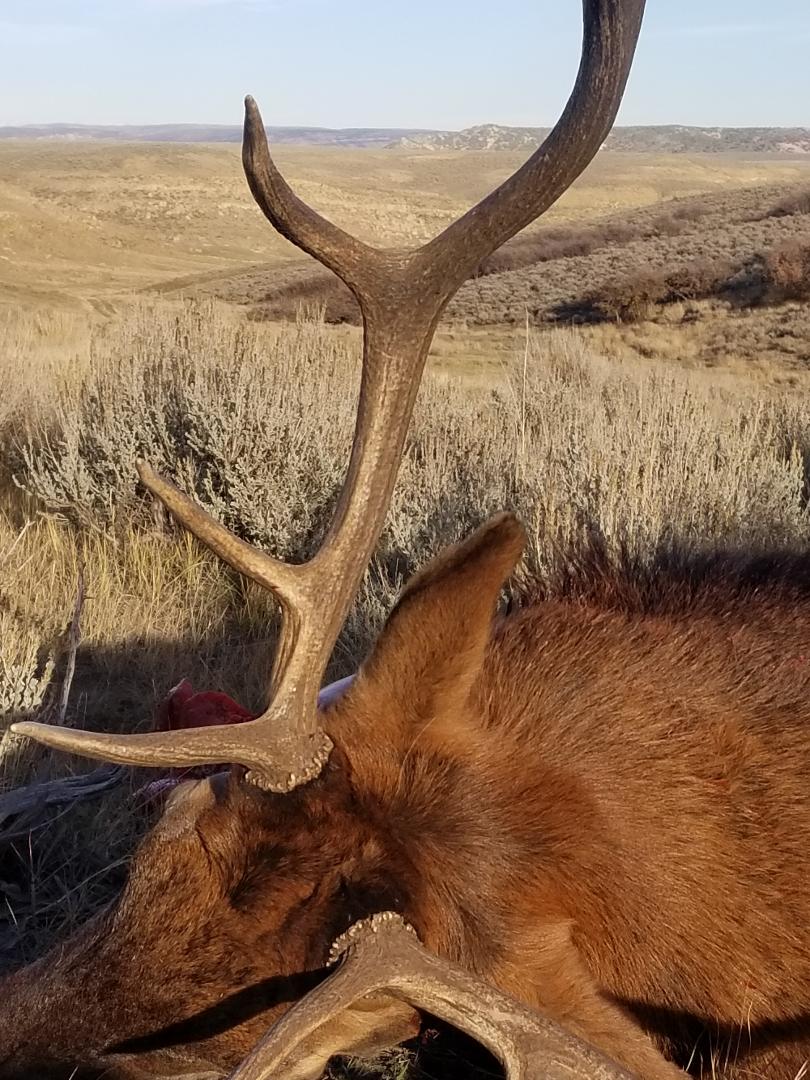 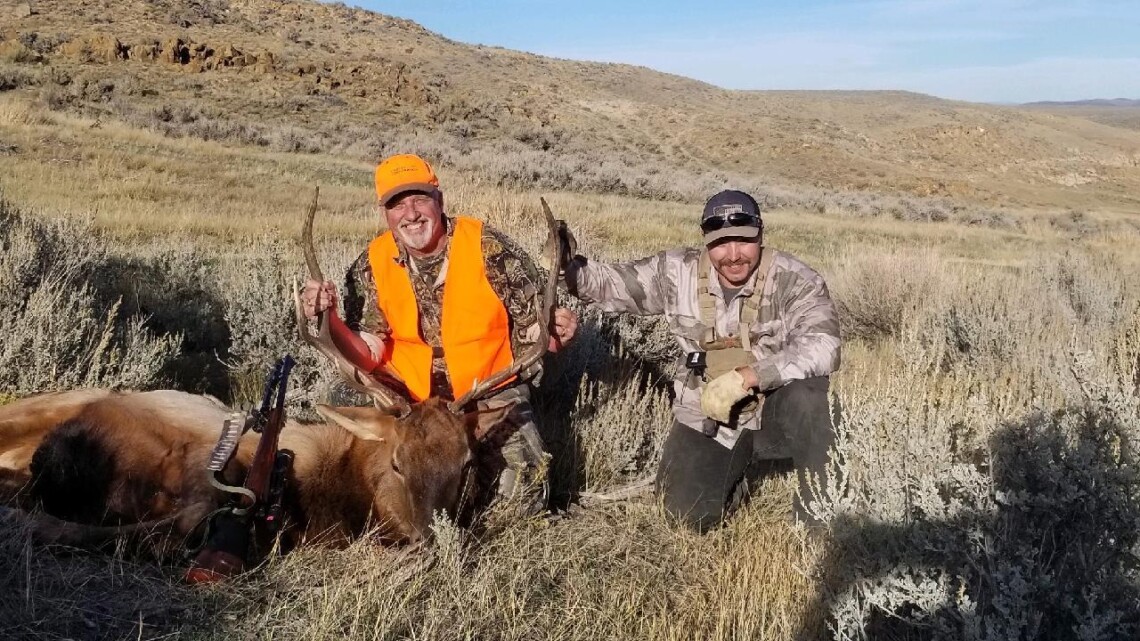 Now the work begins, gutting him up and cooling him off, and the long hike back to the truck to pick him up, which Austin did, while we sat with the elk. Austin arrive about a half hour later and said, “dang, I didn’t realize we hiked that far, it took me forever”! Well I knew it was a long way, just ask my body lol. We winched the elk in the truck with little effort, that God, I was beat, that altitude plays hell with someone that lives at 360 feet lol. 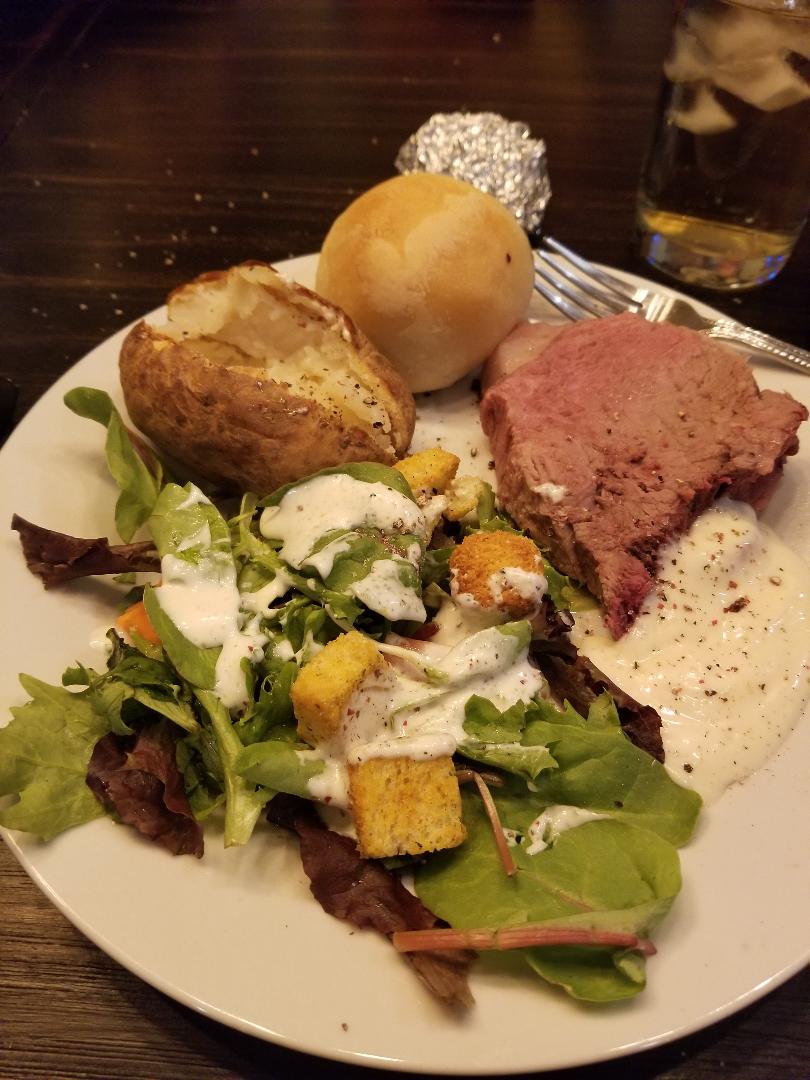 All in all an awesome trip! Shout out to Elk Ridge Outfitters, out of Meeker, Colorado. For those of you wanting to do the same, speak to Tonia Folks 2452 State Highway 13

bookings@elkridgeoutfitterscolorado, and plan ahead as they are already booked for 2022 and are booking through 2024. This outfit is very Pro America and loves our military. You will see the Red, White and Blue in our photos! Very patriotic group! Thanks to my guide Austin Seely and the other guides, Rod, Courtland, Bob, Gary and all the rest for all the laughs. These guides are very professional, and concerned about their clients needs and health. Great bunch of folks and I highly recommend them if you have a hankering for a successful adventure,  with a very professional guide service .